Dorothy May (Edler) Blood was born on May 29, 1924 in State Center, Iowa to John and Hilda (Pfantz) Edler.  She was raised on a farm northeast of State Center with her three siblings, Harold, Donald, and Dolores (Shaver).  She attended a country school through the 8th grade and then graduated from State Center High School in May 1941.

She caught the eye of Henry Harold Blood on a Friday night on Main Street in State Center and he offered to buy her an ice cream cone.  At the age of 19, she took a train to Florida to marry Harold, who had asked not only for her hand in marriage, but also a long weekend pass from the Army.  They were married on September 9, 1943. After they married, they lived in Florida for a short time, Harold on the military base and Dorothy in an apartment. Dorothy worked at a hospital until Harold got his orders and shipped overseas. After moving back to Iowa, Dorothy worked as a nurse’s aide at the Iowa Soldiers Home in Marshalltown until Harold’s honorable discharge from the Army in January 1946. Once he returned to State Center, they began building their lives together.  Dorothy and Harold farmed southwest of town where they raised crops and milked cows.  Dorothy did the bookwork for the farm operation.

Dorothy was baptized and confirmed at St. Paul Lutheran Church and was an active member throughout her life, serving as Treasurer for 22 years. Dorothy and Harold enjoyed hosting the annual Pfantz reunion for many years on the farm. They also enjoyed traveling with friends and family. Dorothy and Harold moved into State Center in 1980.

Dorothy loved playing cards with her family, sister and friends.  She also spent many hours making beautiful Christmas stockings for each new member of the family.  She worked hard to stay ahead of her growing family, even having two stockings ready to have names added for her newest great grandchildren, twins to be born in August. Being involved in the lives of her grandchildren, Dorothy attended many sports activities as well as concerts and musicals.  Halloween was always a fun night for her when all of her great grandchildren would coordinate trick or treating to her house at the same time. The same tradition followed in the spring when the grandchildren and great-grandchildren returned in formal attire for prom night. In recent years, she enjoyed car rides in the country and to the family farm, especially during the harvesting of corn for silage. She also enjoyed bird and squirrel watching on her feeders outside her window. 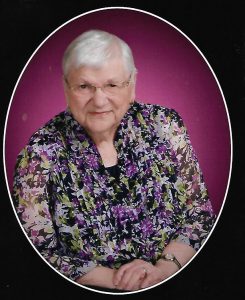