Joe was born to Elsie Eggers and William “Bill” Armbrecht in their farm home just south of Clemons, IA on November 24, 1921.  Joe served in the Army in World War II. Joe and Irene were married on April 13, 1947 with Irene’s father officiating.  They were married 70 years before Irene’s passing in 2017.

As an adult, Joe was a farmer and dairy farmer, served as a county supervisor in the 1980s and served on the REC and CIPCO boards. Joe served as a home missionary through Laborers For Christ, where he traveled around the Midwest completing construction projects for churches and other ministries.

Joe has been reunited in heaven with his loving wife, Irene; his parents Bill and Elsie; sister Pauline; and brothers Louie, Sherwood and Richard Armbrecht. 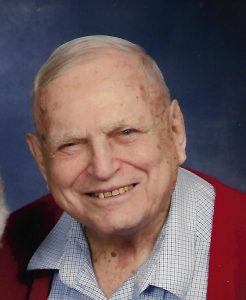