Skip to content
FacebookEmail
| logout
Edward N. Rozendaal died peacefully in his sleep on March 25, 2020, at Park Centre in Newton, Iowa, from complications of ALS. A graveside service will be held at 1:00 p.m, Tuesday, October 27, 2020, at the Sully Cemetery.  In lieu of flowers, cards can be sent to Mary Rozendaal c/o Doug Rozendaal, 481 N. Shore Drive #303, Clear Lake, IA 50428 and memorials can be made to the Iowa 4-H Foundation, the Fellowship of Christian Farmers and the ALS Association of Iowa.
Ed was born on March 6, 1936, to Peter G. and Anna May (Woody) Rozendaal on the family farm near Sully, Iowa.  He grew up there and graduated from Sully High School.  Ed met Mary Freeken while roller skating in Newton and they were married in 1957.  When Ed’s parents died in 1962, Ed and Mary took over the home farm until moving to State Center, Iowa in 1968, where they farmed until they retired to the farm they owned near Colo, Iowa.  They later moved to Newton.
Ed loved his livestock, especially his beef cow herd who never lacked for hay on a cold winter day, growing flowers, being active in the church, and wintering near his grandchildren and friends in California.  Ed participated in several missions with the Fellowship of Christian Farmers to Mexico and Spain.  Ed shared his strong Christian faith by example and was highly respected for his quiet leadership. As the disease progressed, his ever-present big smile and great attitude was a living example to those around him about facing adversity with faith and courage.
He is survived by his wife, Mary of Newton; son, Doug (Kim Pardon) of Clear Lake; daughter, Kelley (Siamack) Haghighi of San Jose, California; his grandchildren: Kimia Haghighi of Oakland California, Annahita Haghighi of San Diego, California and Kayvon Haghighi of Tempe, Arizona.  In death, he will be joining his parents as well as his siblings, Wilbur, Julia, and Oscar Rozendaal. 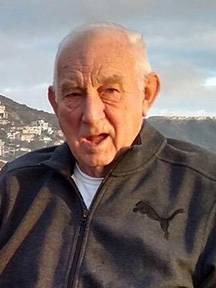