Donald F. Lane, 93, died Saturday, November 23, 2019, under the care of Wesley Life Hospice in his home at Park Centre, in Newton, Iowa. A memorial service will be held at 11:00 a.m., Thursday, December 5, 2019, at the Wallace Family Funeral Home and Crematory in Newton. The family will greet friends with a coffee time from 9:30 a.m. until the time of service. Condolences and memorials may be left at the funeral home or sent to Mary Douds, 404 Friendly Dr., Marshalltown, Iowa 50158, for a memorial to be determined by the family or can be sent to Wesley Life Hospice.

Don was born March 31, 1926 in Albia, Iowa.  He graduated from Newton High School with the Class of 1944 and enlisted in the Navy at the age of 17. Because of Don’s young age, his parents had to sign for him to go to the Navy.  He took his basic training at Farragut, Idaho, where he took hospital corps training. After his training, he was shipped to San Diego where he chose to take dental school training.  Don worked side chair with a dentist and cleaned teeth on new recruits coming and going out of the ports of San Francisco. This is where he completed his time in the service, being discharged in 1946.

On June 1, 1947, Don married Marcella Bagnall of Newton at the First Baptist Church in Newton. To this union, Don and Marcella had three children: Robert, Mary, and Tom.  After attending AIB business college, he went to work for the Denniston and Partridge Lumber Company in Newton until 1949, when they moved to State Center to open up the Denniston and Partridge Lumber Yard.

After many wonderful years and friendships, Don and Marcella moved back to Newton in 1973, where Don continued to work for Denniston and Partridge until his retirement, completing 41 years.

Don was preceded in death by his parents, George and Selma Lane; wife, Marcella in October of 2002; his five brothers: Paul, Kenny, Ted, Phillip, and Leo; his in-laws, Albert and Ethel Bagnall; brother-in-law, Wayne Bagnall; and sisters-in-law, Wilma Lane and Ruth Dennis. 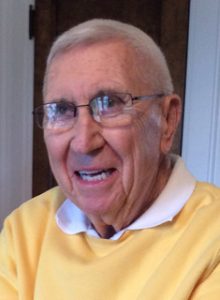