Mary Carol Nelson West, 87, of Castle Rock, CO, passed away Sunday, November 3rd. Mary was a Christmas Eve baby born December 24,1931 in Madison, WI. She received her R.N.
from Bethesda School of Nursing in St. Paul, MN. Upon receiving her degree, Mary moved to Denver, CO where she practiced as a surgical nurse. In Denver, she met the love of her life, James C. West(Jim) with whom she was married for 35 years. Mary and Jim spent their married life raising three children in State Center, IA. While there Mary worked as the West Marshall School Nurse and later in the Short Stay Surgical Unit of Mary Greeley Hospital in Ames, Iowa. She was active in her local chapter of the Order of Eastern Star and P.E.O., a philanthropic organization supporting women’s advancement. In addition to her nursing career Mary was a devoted politician’s wife attending fund-raisers and political events across Iowa. Upon retirement Mary moved back to Colorado and has spent the past twenty years enjoying time with family, traveling, reading and actively helping with any art project the grandkids brought home. Mary was preceded in death by her husband, Jim, her brothers, Alden and Bruce, and her sisters, Virginia, Barbara,Verna, and Donna. She is survived by her sister Rose, her children Guy(Chris) West, Dean (Martha) West, Raina (Matt) Paisley, her grandchildren, Matthew (Toni), Lauren, James, Jack, Lane, Tate and her great grandson Kaiden. A Memorial Service will be held on December 7,2019 at the First United Methodist Church of Castle Rock, 1200 South Street, Castle Rock, CO 80104 at 10 AM. with a reception to follow. Internment will be at the Fort Logan National Cemetery, Denver, CO at a later date. 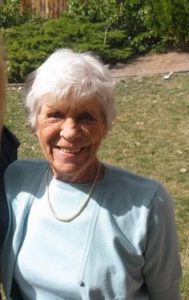