Robert “Rob” Davis, 84, of State Center, Iowa, passed away on May 1, 2019 in the comfort of his own home surrounded by his loving family.

Robert Edward Davis was born on January 18, 1935 in Marshalltown, Iowa, the son of Earnest and Elise (Doll) Davis. Rob was currently in a long term relationship with LaVonne Collier who never married but didn’t let that title hold them back from being an amazing couple.  Rob worked a majority of his time at the Railroad in Marshalltown and was a Carman.  He also held other jobs, but his longest career was working with the railroad.  He had a passion for fishing, hunting, spending time with his family and friends and working with his hands.

Rob is preceded in death by his parents, first spouse Audrey and two children as well as brothers and sisters. 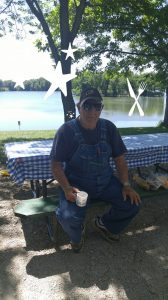