Anita Hart (Bond), 90, passed away on Sunday, November 11, 2018 at State Center Specialty Care. Funeral services were held on Friday, November 16, 2018 at the Mitchell Family Funeral Home at 11:00 a.m. with a public visitation held one hour prior to services. Memorial contributions may be made to the family to be used at a later date. Anita’s family would also like to thank State Center Specialty Care for the fantastic care and love that they had provided for Anita in the last years she had been with them.  For condolences visit www.Mitchellfh.com or call (641)-844-1234.

Anita was born on August 15, 1928 to Carroll ‘Ted” and Opal (Eckhart) Bond in Garwin. In her early years she attended the Rockvalley Country School until the 8th grade and then attended the Marshalltown High School and graduated in with the class of 1947. After high school Anita married the love of her life Eugene Hart on May 30, 1953 at Saint Mary’s Catholic Church in Marshalltown, Iowa. The two made their lives together raising two children, Steven and Bryan. Anita had a bit of artist creativity; she enjoyed paint by numbers and could always be found doodling, that love was passed down to her grandchildren who she would teach how to draw as well. In her younger years Anita and Gene rode Harley’s and loved to dance.  Quite often they would go dancing whether it was in a rec room or a dance hall, the two would make sure that they had the opportunity. Summers were spent taking trips to Pepin Lake in Wisconsin to their cabin. While spending time at the Lake the family loved to go boating and fishing and watching the sail boat races. Anita’s love for her grandchildren showed even more naming the boats after them.  She enjoyed working at Strand Bakery, Hy-Vee Bakery and for many years in food service at the Lenihan lunchroom and later, daycare for her grandchildren.  Anita leaves behind a loving family who will cherish her memory.

She is preceded in death by her husband Eugene, and parents Carroll and Opal. 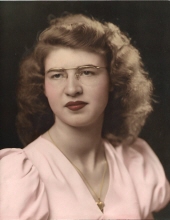