Funeral services for  Lanny will be held at 10:30 a.m. on Wednesday, November 29, 2017 at Trinity Lutheran Church in State Center, IA, with Rev. Mike Maddick officiating.  Public visitation will be held from  5:00-7:00 p.m. on Tuesday, November 28, 2017 also at the church.   Memorial contributions may be directed in Lanny’s name to his family.  For further information or to send a condolence please visit www.mitchellfh.com or call (641) 844-1234.  Mitchell Family Funeral Home is caring for Lanny and his family.

Lanny Ross German was born on March 30, 1936 in State Center, Iowa, the son of Lorenz and Aleta (Gerke) German.  He was raised and educated in the State Center school district, where he graduated from State Center High School with the class of 1953.

On March 4, 1956 he was united in marriage to Betty Wagner in Marshalltown.  Lanny lived in State Center all of his life.  He farmed the family farm and helped his father and brother run the corn sheller.

Lanny left farming to go work at Fisher Controls. In 2002 he retired after 39 years of employment.  He also worked part time for Kent Feeds, Harold Blood and farming with his uncle Gerke.

Lanny was a 4-H leader and did volunteer work with the Marshall County Beef group and the Eye Openers Drum and Bugle Corp.  He served several years as a chaperone in the boy’s dorm at the Iowa State Fair.

Lanny was a lifelong member of Trinity Lutheran Church where he served many years as an officer of the congregation.

Lanny’s greatest enjoyment was watching his children and grandchildren in their sports activities and showing 4-H cattle and sheep around the country.  We don’t remember him ever missing an Iowa State Fair.   Lanny was especially proud of winning Market heifer grand champion at the Iowa State Fair 3 times in a row.  He also loved cheering on his beloved Cubs and Iowa Hawkeyes. 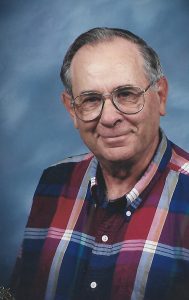