LaVern German, 87, of State Center, departed this earthly life surrounded by his family on the morning of Wednesday, November 15th, at Iowa Methodist Medical Center in Des Moines.

Funeral services will be held at 10:30 a.m. Saturday, November 18th, at Trinity Lutheran Church in State Center with Reverend Mike Maddick officiating. He will be laid to rest at Hillside Cemetery. Visitation will be held from 5-7:00 p.m. on Friday, November 17, 2017, at Mitchell Family Funeral Home in Marshalltown. For condolences, please visit www.mitchellfh.com. Ph. 641-844-1234.

Born on September 23rd, 1930, at State Center, he was the son of Lorenz and Aleta (Gerke) German. He graduated from State Center High School in 1948.

On December 3rd, 1950, he married Nola Sparks at Trinity Lutheran Church in State Center. Home was always in the State Center and St. Anthony communities where he helped his dad run the corn sheller and also farmed. LaVern worked at Fisher Controls in Marshalltown for 27 years and then at Farm Service for 10 years after retiring from Fishers.

LaVern treasured his family and thoroughly enjoyed attending his grandkids’ school activities.  He was a 4-H leader and later enjoyed watching his kids and grandkids show at the fair. He was an active member of Trinity Lutheran Church.

In death, LaVern rejoined his parents Lorenz and Aleta, sisters Etheleen Veren and Eloise Klemme and many brothers-in-law and sisters-in-law.

The Cubs lost their greatest fan this week. 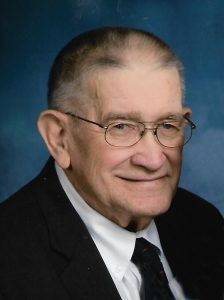