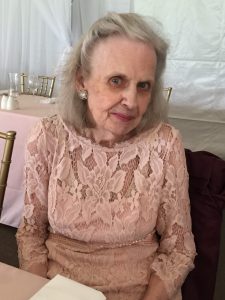 Barbara Jean Soorholtz, a.k.a. as “Babs”, passed away at UnityPoint Health Hospital – Marshalltown on October 29th at age 85 with her family by her side.  She was born on May 25, 1932, to Clara Petersen (Herbert) (Jackson) and Clifford Herbert in Marshalltown.  After schooling in Marshalltown and Denver, she graduated from East High School in Denver, Colorado and later received her nursing degree at Marshalltown Community College, which she used to help residents at the Marshall County Care Facility.  She was united in marriage to John E. Soorholtz on September 2, 1951, in Melbourne, Iowa, and had five daughters during that union.  John predeceased her on December 28, 2012.

After growing up in the city, she became the ultimate farm wife.  Barb helped John on the third-generation, century family farm, in a home built in 1886.  George H.W. Bush stayed there during his campaign against Ronald Reagan.  Barb told George she liked him, but she was one of Dutch’s Dollies and was going to vote for Ron.  While not afraid to get her hands dirty, she loved to paint, upholster furniture and decorate (fireplace moved from one end of the house to the other), garden and was an excellent cook, like her father.  She sewed numerous matching outfits for the daughters and granddaughters and made quilts for every grandchild. There was nothing on the farm that she wouldn’t do or try. She also had chickens and milked cows.

Barbara volunteered on many levels.  She was involved in politics for many candidates including her husband’s many campaigns.  Her volunteer work with the St. John United Church of Christ, St. John Guild, Get Together Club, Melbourne Fortnightly Club and the YWCA was a highlight for her, but more extensive was her quiet support and help to numerous friends, elderly persons and family that needed extra attention and aid.  She helped start the First Responders in Melbourne. She lovingly drove folks to appointments, took them to the store and lunch, gave people essential items and donated to many charities.  Barbara was caretaker to a number of family members through the years and gave of her time to grandparents, her husband and all of her grandchildren.  She often commented to her children, “We need to help them.”  She was the most giving and loving person to walk this earth. Her life was a demonstration of love and an act of service. She never complained and was always a caring and fun-loving spirit.

As a mother, Barbara raised five daughters with love and humor – as if there would be any other choice.  Instilled in the girls was a supreme self-confidence, a fierce independence and a work ethic with living life to the utmost fullest. Famous stories are that she claimed she could have been an Olympic swimmer (husband John: “I never saw you get in a pool”) and sneaking John’s clothes to the residents at the County Home where she worked (husband John: “those are my shoes!”).  Barbara so adored her daughters, she provided cover to the principal when they skipped school (“they are here planting trees”) and protected them from silly school rules (“they are wearing pants to school in freezing weather!”).  All knew not to mess with her children as she could be very stubborn and persuasive. She was precious and a treasure to her daughters and was a favorite mom to visit by all of her daughter’s high school friends and college sorority sisters.

As a grandmother, Barbara could not be beat.  Not only did attend many athletic events, dance recitals and extra-curricular activities, but she would bring pigs to school, help with projects, and drop anything to offer her time.  She was immensely proud of each and every grandchild and displayed photographs of them all over her home.  She loved family being together as was clear at every holiday meal that was shared. And, no Christmas or birthday or “just because” occasion was complete without the over-abundance of gifts she would shower on them.  Often she would call, write or reference a grandchild to show her love.  Each one carries a special moment or story about the hilarious banter between Barbara and John.

Mitchell Funeral Home will host a visitation on Friday, November 10, from 5:00 to 7:00 p.m., and a funeral service on Saturday, November 11, at 10:30 a.m.  For condolences or questions please visit: www.mitchellfh.com.or call the Mitchell Family Funeral Home at 641-844-1234. Memorials may be given to the Barbara Soorholtz Memorial.