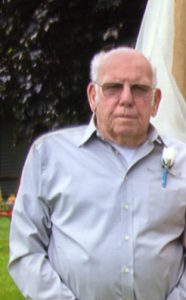 Visitation will be on Sunday, November 5, 2017, from 3:00 until 5:00 p.m. at the Mitchell Family Funeral Home, 1209 Iowa Avenue W, Marshalltown.  The family will be having a private burial on Monday, November 6, 2017, at Hillside Cemetery in State Center.   In lieu of flowers memorials may be directed to the family to be designated at a later date. For condolences or questions please visit: www.mitchellfh.com or phone 641-844-1234. Mitchell Family Funeral Home is caring for Henry and his family.

Henry Louis Hartwig was born in State Center, Iowa; he was the son of Alvin and Lorraine (White) Hartwig. Hank attended school in the State Center school district graduating with the class of 1957.  He had lived his entire life around the State Center area.  He farmed from 1957 until 1964. He continued to work as a cattle buyer until he passed. He worked for Bookey Meat Packing, Swift & Company, Monfort,  Marshall Pack,  Agri Processors, and Agri Star.  He also worked in commissioned feeder calves sales and fat cattle sales. Hank was a member of the Cattleman’s Association, Masonic Lodge and Ducks Unlimited. He was always willing to help his family show calves and pigs in 4H.