Ralph Robert Howe, 95, of Clemons, passed away in his purple house, surrounded by his loving family on Wednesday, October 11, 2017. Visitation will be held on Sunday, October 15, 2017 from 4:00 – 6:00 p.m. at St. Joseph Catholic Church in State Center, Iowa. A vigil service will follow and begin at 6:00 p.m. lead by Sister Connie Howe. A mass of christian burial will be held on Monday, October 16, 2017 at 10:00 a.m. at St. Joseph Catholic Church with Father Rick Dagit officiating. Burial will follow in the St. John’s Cemetery in rural St. Anthony, Iowa.

Ralph was born April 7, 1922 in Cedar Falls, IA to Ellsworth and Luella (Leversee) Howe. He was the youngest of three children. The family moved from rural Finchford to Cedar Falls where he attended school and then later they moved to a farm near Janesville, IA to start his junior year. Ralph graduated from Janesville High School. Following graduation, Ralph was employed at Viking Pump Co. in Cedar Falls as a special project lathe machinist. During this time (1940), Ralph met his future wife, Rita Dunn of Clemons, a college student at State Teachers College (UNI) in Cedar Falls.

After Pearl Harbor was bombed, Ralph enlisted in the US Navy and served his country for three years (1942-1945) on YMS 220 Yard Minesweeper. Stationed in Key West, FL prior to being sent overseas, Ralph returned to Iowa and married Rita on June 1, 1944 at Sacred Heart Catholic Church in St. Anthony, IA. They lived in Miami and Key West for a short while before Ralph’s ship left for the Pacific. WWII ended August 1945 and Ralph was released from duty a few months later, received his honorable discharge from the US Navy as MM First Class and rejoined his wife Rita in Eldora, IA where she was teaching. Ralph attended Barber College in Des Moines, received his diploma and was employed at Rubow’s Barber Shop in Eldora.

In the spring of 1948 Ralph and Rita moved to a farm north of Clemons where they raised a family of six children. Ralph served 12 years on the West Marshall School Board, including two years as President of the Board. He served as a Marshall County 4-H leader in his sons’ local 4-H club. Ralph was an active member in the Iowa Pork Producers Association, was named a Master Pork Producer and became President of IPPA 1976-77. Farm Quarterly magazine ran a feature story about his pork operation, including a photo of two piglets for its cover, later referred to as “Hogs Are Beautiful.” In 1987 Ralph became president of the National Livestock and Meat Board Association with headquarters in Chicago. He received the Iowa Master Farmer Award from Wallace’s Farmer magazine in 1989.

Ralph and his wife Rita had a strong, loving marriage for nearly 60 years. He enjoyed traveling with the family in their camper, boating and playing cribbage. After retiring, he enjoyed bicycling on trails, attending Atlanta Braves games and time on his computer. His #1 priority was always his family and his Catholic faith.

In death Ralph has rejoined his parents, his wife Rita (2004), his sons, Rick and Russell, his sister Virginia and his brother Forrest.

Fredregill Funeral Home, in Zearing, has been entrusted with the care of Ralph and his family. 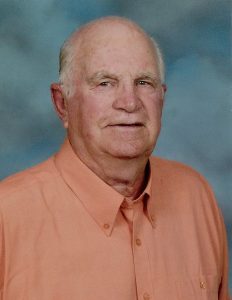