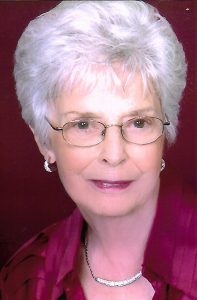 Esther Miller, 90, of Marshalltown, Iowa, passed away  peacefully at the Iowa Veterans Home on Saturday, September 16, 2017, surrounded by her loving family.

Mary “Esther” (Daters) Miller was born April 17, 1927, in Haverhill, Iowa. She was the oldest of seven children born to Charles and Rosena (Neuroth) Daters. She graduated from State Center High school with the class of 1945, where she participated in four years of basketball and played the organ at church. Esther attended AIB College of Business in Des Moines, Iowa on a basketball scholarship, playing in Iowa and other states. She later returned to the family farm in State Center, Iowa. On June 10, 1950, she married Ralph Albert Miller at St. Joseph’s Church in State Center. Together they had four children: Jeffrey Allen, Jerry Lee, Deborah Ann, and Diane Lynn. Ralph and Esther moved to Marshalltown and Esther started working at Marshall Canning Co. and later transferred to Marshall County ASC office as secretary and treasurer. She also continued to play basketball for the local VFW basketball team. Esther was most known for her dedicated service to the Marshalltown Community School District, where she was a secretary for 30 years. She also worked as a secretary for East and West Marshall Schools, St. Mary’s Church, Center Associates, and SATUCI. She was a member of Beta Sigma Phi and the St. Mary’s Council of Catholic Women group. Esther most enjoyed watching her children and grandchildren participate in their many activities, hosting holiday family gatherings, baking desserts for the Senior Citizens Center, visiting with friends, and working in the yard.