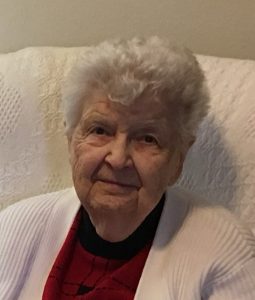 Irene Armbrecht, 96, of Bickford Cottage in Marshalltown, Iowa formerly of Clemons, Iowa passed away on Monday, September 4, 2017, with her loving family by her side after a struggle with dementia.

Funeral services will be held at 11:00 a.m. on Wednesday, September 6, 2017, at St. John Lutheran Church near State Center, Iowa. Visitation will be from 10:00 a.m. until service time at 11:00 a.m. at the church. Memorials may be directed to the family to be designated at a later date. For condolences or questions please visit: www.mitchellfh.com .  Mitchell Family Funeral Home is caring for Irene and her family. Phone 641-844-1234.

Irene Catherine Marie Happel was born on July 13, 1921, in Wilton Junction, Iowa; she was the daughter of Pastor P.W. and Estelle (Frantz) Happel. She attended College in Davenport, Iowa and had worked as secretary in many offices in Davenport. Irene was active in the Walther League and her church. On April 13, 1947, she was united in marriage to Joseph Armbrecht of Clemons, Iowa; after they were married they moved to their first house which had no running water, her first. She always raised a huge garden and canned all her produce. Since there were no piano teachers in the area she was asked to teach piano lessons (for a dollar a lesson), which she did for many years. Irene remained active in the church and for many years she was the organist at her church, St John Lutheran Church. After Joe retired in 1988, they enjoyed traveling through the United States.

Left to cherish Irene’s memory is her husband of 70 years, Joseph, children, Tom Armbrecht of Marshalltown, Iowa, Sue (Todd) Rogers of Clemons, Iowa, and Peggy Gray of Urbandale, Iowa, she is also survived by 4 grandchildren and 1 great granddaughter.