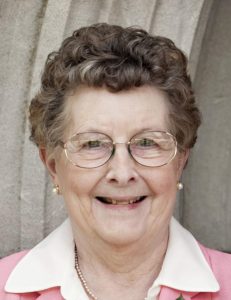 Funeral services will be held at 10:30 a.m. on Monday, August 7, 2017, at New Horizons United Methodist Church in Melbourne, Iowa. Visitation will be on Sunday, August 6, 2017, from 4:00 to 6:00 p.m. at the Mitchell Family Funeral Home in Marshalltown, Iowa. Memorials may be directed to New Horizons United Methodist Church or the Alzheimer’s Association – Greater Iowa Chapter’s Walk to End Alzheimer’s.

Virginia White was born September 6, 1928, in rural State Center, Iowa; she was the daughter of Fred and Pearl (Billman) Goecke. She graduated from LaMoille High School in 1945 and attended American Institute of Business, in Des Moines, and graduated from Marshalltown Business College in 1947.  She served as Secretary for three years at the Farm Bureau – Extension Office.

On June 3, 1950, Ginny was united in marriage to the love of her life, Ralph “Red” White and they lived on the farm their entire married lives.  Ginny and Red could often be found checking out the crops, driving the state on various road trips and looking for the local ice cream spot. Their hospitality was unparalleled and Ginny could often be found entertaining for the masses, which entailed whipping up meals and baking her famous pies and cinnamon rolls.  She was the ultimate Proverbs 31 Woman – faithful, feeding her household, “considering a field” and serving as a light to all around her. She was even recognized for these traits as a Wallace’s Farmer Master Farm Homemaker – someone who knows what needs to be done – in the home, around the farm and in the community.

Virginia chose to be a full time wife and mother; however, she found it important to take leadership roles in her church, Farm Bureau, Farm Marketing of Commodities, Farm Legislation, P.E.O., Eastern Star, Music Club, Legion Auxiliary and 50 plus. Ginny was an involved member of the New Horizons Methodist Church in Melbourne, U.M.W., Church Choir and Cowbelles.

Ginny was passionate about her family, friends and farming.  She helped with the farm operation and the farm records; enjoyed time spent with her children, grandchildren and lit up when her great-grandson visited.  She also enjoyed gardening, particularly her roses, china painting, reading and writing poetry.  The family Christmas card was always a treasure to read, as her wit was always at work sharing of her family’s endeavors while waxing her poetic prose.