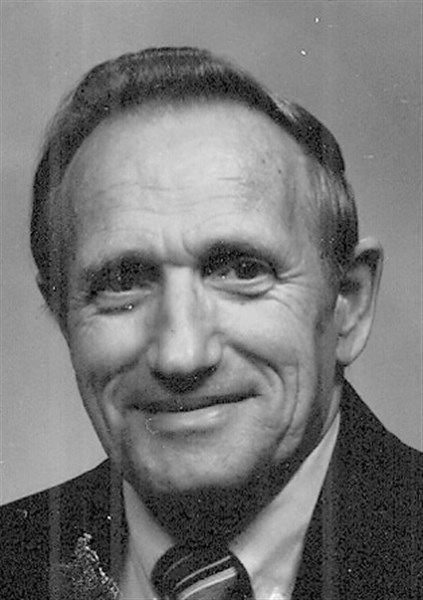 Robert (Bob) Nusbaum was born July 11, 1930 to
Dorothy (Menzel) and Elwood Nusbaum. He attended St Mary’s
School graduating in 1948, where he was proud to be a part
of the well known “Buzz Boys” basketball team. He was
united in marriage on December 30, 1951 to Beverly Stice. He
served our country as a member of the Air Force during the
Korean War.  Bob retired in 1989 from the U.S. Postal
Service after being a mail carrier for 26 years. He was a
member of St Mary’s Church and the American Legion. Bob
was a loving and caring husband, father and grandfather who
enjoyed following his children and grandchildren in all
their endeavors.Bob is survived by his loving wife of 64 years
Beverly, four children, Rick (Pam) Nusbaum of Cedar Rapids,
Becky (Mike) Mastoris of Santa Cruz, Robert (Paula) Nusbaum
of State Center, and Gary (Tisha) Nusbaum of Santa Cruz.
Along with ten grandchildren and ten great grandchildren,
and his brothers Jim (Esther) Nusbaum and Dick (Laurie)
Nusbaum. He was preceded in death by his mother and father,
step father Ernie Dodd; father-in-law Arthur Stice,
mother-in-law Geraldine Simms, step-father-in-law William
Simms, Sister Pat Ricketts and brother-in-law Marvin
Ricketts. His family invites all to a visitation from
5-7:00p.m.,pray service to follow at the Mitchell Family Funeral Home on Thursday,
April 7, in Marshalltown and a celebration of his life at
10:30 a.m at Saint Mary Church in Marshalltown on Friday, April
8. For condolences please contact Mitchellfh.com or call
(641)-844-1234.