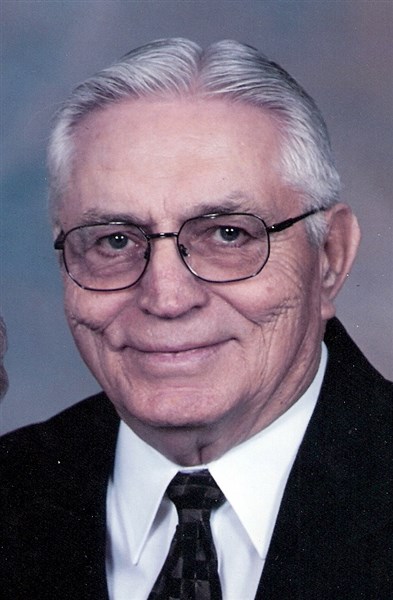 A Funeral Mass will be celebrated at 9:30 a.m. Saturday, February 21, 2015, at St. Joseph’s Catholic Church in State Center, with Fr. Rick Dagit officiating. Visitation will be held from 5:00 – 7:00 p.m. on Friday at the church with a 7:00 p.m. vigil service.  Memorials may be directed to the family to be designated at a later date. Chuck will be laid to rest at a later date in the St. Joseph Cemetery in State Center. For condolences, please visit www.mitchellfh.com. The Mitchell Family Funeral Home is caring for Charles and his family.

Born on October 3, 1927, at Haverhill, Iowa, Chuck was the youngest of seven children born to Leo F. and Katherine (Neuroth) Jansen. He received his education in St. Anthony, LaMoille, and later at St. Mary’s High School in Marshalltown – driving from LaMoille in a Model T Ford that he scrimped and saved to purchase for $80.  He served a short time in the U.S. Navy and was called home and honorably discharged; he returned home to assist his father-in-law on the family farm.

On September 2, 1946, Chuck was united in marriage to the love of his life, Doris Jean Snyders, in State Center. State Center was home to the young couple where they raised their family and were active in the community. Charles was the longtime owner and operator of Jansen Insurance, representing Farmer’s Mutual Hail Insurance, since 1971. He successfully grew the business (for a time with his son-in-law, Mike Pfantz) until his retirement in 2008, then selling to his grandson, Brad. Charles was always family minded, from working with his father-in-law to his son-in-law and grandson.

Mr. Jansen was a faithful member of St. Joseph’s Parish in State Center, the Lincoln Valley Golf Association, American Legion Post #122, and was a former Lion’s Club Member.  Above all else, Chuck was a family man.  His family always came first and his pride and joy were his six great-grandchildren.  He considered himself quite blessed to have the opportunity to participate in their lives.

Left to cherish his memory is his son Larry (Echo) Jansen of Grinnell; and daughter LeAnne (Mike) Pfantz of Omaha; three grandchildren and their families: Justin Jansen, Brad (Jaine) Pfantz, and Allie, Carter, Olivia and Charlie; Tanya (Casey) Waite with Hudson and Connor; his only surviving brother, Virgil, of Omaha; as well as many nieces, nephews, business colleagues, and friends.