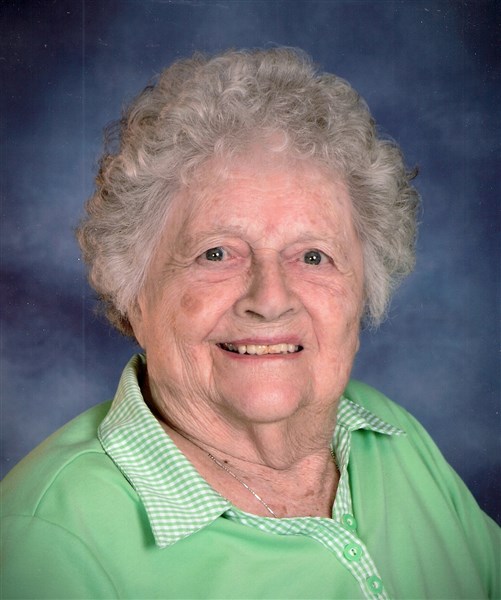 For more information or to send a condolence please visit: www.mitchellfh.com or call 641-844-1234. Mitchell Family Funeral Home is caring for Rita and her family. In lieu of flowers, memorials will be sent to “Unbound” to support her 2 sponsored children in Ecuador and the Philippines.

Born April 21, 1917, in Rhodes, Iowa to Jud and Florence Goodman Malloy, Rita was the second eldest of eleven children. She grew up on a farm northwest of State Center and was a 1933 graduate of State Center High School. She attended Iowa State Teacher’s College in Cedar Falls, receiving a teaching certificate. Seven years of teaching included third and fourth grades in Rhodes, Clarksville and Milford. In 1942, she retired from teaching and went to Long Beach, California where she worked for Union Oil Company. She married Dale Figgins on February 19, 1942 in Bremerton, Washington where Dale was serving in the U.S. Navy. When World War II ended, they came back to make their home in State Center. Rita was a member of St. Joseph’s Catholic Church where she served as a CCD teacher, lector, sacristan, and offices in the CCW. Other memberships included American Legion Auxiliary, Rural Letter Carriers Auxiliary, NARFE, State Center Woman’s Club, State Center Historical Society, State Center Development Association, Kauffman Selection Committee and Senior Citizens. An active member of the Democratic Party; she served several offices on the Marshall County Central Committee. In 2002 she was presented the Governor’s Volunteer Award for volunteer service. Her hobbies included scrapbooking, photography, sewing, playing cards, cooking, baking and spending time with family and friends. For several years she wrote a column, “Rita’s Ramblings” for the State Center Enterprise and was a sales representative for Realsilk Knitting Mills.

Preceding her in death were her husband Dale, grandson Joel Figgins, her parents, two brothers: William Gerald and Robert and five sisters: Ann, Kathleen, twins Ruth and Rose and an infant sister.