Kenneth “Ken” Kreykes, 90, of State Center, Iowa, passed away peacefully surrounded by his family on the afternoon of Friday, January 13, 2023 at Grandview Heights in Marshalltown.

Memorial services for Ken will be held on Saturday, February 4, 2023 beginning at 11:00 A.M. at the Mitchell Family Funeral Home. A visitation for family and friends will take place one hour prior to services. Memorials in Ken’s name may be directed to the family for a later designation. For additional information or to send a condolence to the family please visit www.mitchellfh.com or call 641-844-1234.

Kenneth Lee Kreykes was born July 25, 1932 to parents Joseph “Joe” and Henrietta (VanderBosch) Kreykes in Boyden, Iowa. He was the oldest of four children. Ken attended and later graduated from Orange City High School. He later furthered his education at Northwestern College.

In 1950 Ken was united in marriage to Dorothy Beimers (later divorced). They resided in Missouri Valley, Iowa where they raised their son Douglas. While in Missouri Valley, Ken worked for the Iowa Highway Patrol until 1967. Beginning in 1967, Ken began working for AAA insurance as a claims adjuster. He worked with the company for many years and would later retire. Additionally, he was a sports official/ referee for the Iowa High School Sports Association covering football, basketball, track, baseball, and softball. In 1992, Ken was inducted into the State of Iowa High School Athletes Officials Hall of Fame; an honor that he was extremely proud of.

On October 28,2000, Ken was united in marriage to Joy Vellinga in State Center, Iowa. They were longtime members of First Congregational Church in Marshalltown, Iowa. Over the course of 17 years, they wintered together in Mesa, Arizona which he always looked forward to doing. In his free time, Ken loved to fly airplanes and even had his private pilot license. He enjoyed going golfing, tennis, and volunteering. He spent every moment with his family that he was able to.

He is preceded in death by his parents, Joe and Henrietta Kreykes and his brother-in-law Richard Hendrickson 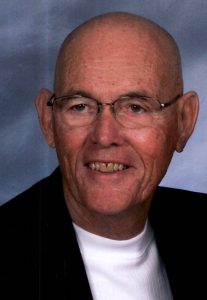