Eric Wayne Dee was born April 2, 1943 in Marshalltown, Iowa, the first son of Donald and Nellie Dee.  He grew up in the Melbourne area, with the family moving to the State Center area in 1964.  He was an active Marshall County 4-Her. He graduated from Iowa State University in 1965.  At ISU, he was a member of Tau Kappa Epsilon fraternity, tapped for Gamma Gamma and Cardinal Key and co-chaired VEISHEA, the largest student-run festival in the nation. He also served in the U.S. Army Reserve.

Alongside his parents and brother, Allan, the family operated a purebred Yorkshire seedstock swine business, Dee Brothers Company, northeast of State Center.  The business sold breeding stock for over 30 years domestically and internationally until 1997, when the business was sold.

Eric’s accomplishments as a leader in agriculture are numerous, including: Iowa Pork Producers’ Master Seedstock Producer; served on the Iowa Beginning Farmer board; served on both the Iowa Pork Producers and National Pork Producers Legislative committee; was a director, treasurer and vice president of the Iowa Pork Producers organization; managed sales for the Iowa Yorkshire Breeders; chaired the Iowa Pseudorabies Eradication committee (until successful disease eradication); served as a director of the National Live Stock and Meat Board; served on the USDA secretary’s Swine Health Advisory committee; chaired the Farmers for Grassley election committee in 1974 when now-Iowa Senator Grassley first ran for US Congress; and the Dee family hosted President Ronald Reagan at their farm in 1982.  Eric is also an inductee to the Iowa State University Animal Science Hall of Fame.  Eric was a smart, creative, clever, risk-taking businessman and a talented animal scientist. His contributions to animal agriculture were respected throughout his career.

The family moved to Northfield, Minnesota in 1999.  For six years, always the farmer, Eric created a community garden, providing food for local families through the Community Action Center Food Shelf.  One year he grew over 750 pounds of pumpkins so that Food Shelf client families’ children would have pumpkins for Halloween.  He was also a member of the Northfield Garden Club.

Eric married Jayne Hager in 1977; she survives him.  He is also survived by their two sons:  Graham (Angela) and their two daughters Reagan and Berit; Evan (Jessica Koopman), their son Nolan, and Jessica’s children Ava, Benton and Maryn Edler; and his brother, Allan (Shirley).  Eric died in his home on January 10, 2023.

Services will be private.  Memorials may be directed to the Community Action Center of Northfield.  www.northfieldfuneral.com 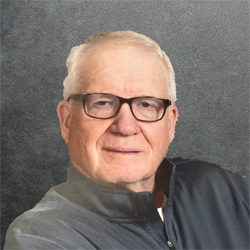