Margaret Lee Gaedke, 87 of Colo, died Sunday, January 1, 2023, at Iowa Lutheran Hospital in Des Moines.
Margaret was born September 8, 1935, in Cambridge, Iowa the daughter of Lester and Lola (McKeever) Miller. She graduated from Fernald High School in 1952 and attended nursing school in Marshalltown where she earned her RN. She worked at Story County Hospital for many years until becoming DON at Colonial Manor in Zearing, which is where she retired from. On November 7, 1964, Margaret was united in marriage to Marcel M. Gaedke at Memorial Lutheran Church in Nevada.
Margaret enjoyed attending her children’s and grandchildren’s school events, reading, music, cooking, her church family and big family gatherings. She loved having visitors and always gave a hug, kiss and “I love you” before you left.
Margaret is survived by her son, Mike (Candy) Gaedke; her daughters, Barb (Russ) Mayfield, Lauri (Ricky) Dodd and Michelle (Jay) Ringgenberg; eleven grandchildren; and fifteen great-grandchildren. She was preceded in death by her parents; her husband; her daughter, Linda L. Smola (in infancy); her brothers, Larry Miller and Donald “Pete” Miller; and her sister, Lugene Gaedke
A visitation will be 5-7 p.m. Friday, January 6, 2023, at Rasmusson-Ryan Funeral Home (1418 Fawcett Pkwy) in Nevada. A funeral service will be 10 a.m. Saturday, January 7, 2023, at Trinity Lutheran Church (206 1st Avenue S) in State Center. Burial will be at a later date at the Cambridge Cemetery in Cambridge.
Memorial contributions may be made to Trinity Lutheran Church in memory of Margaret.
Rasmusson-Ryan Funeral Home in Nevada is handling arrangements. Condolences may be sent to the family online at www.rasmussonfh.com 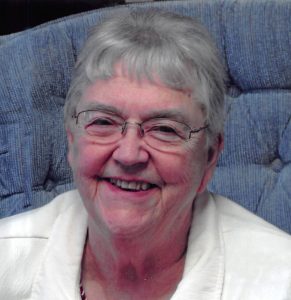