Frank was born on December 22, 1962 to Charles and Donna (Brucklacher) Knights in Marshalltown, Iowa.  In his early years, he attended BCL schools before moving to West Marshall, where he graduated with the class of 1981. Cindy Gerke, the girl across the mile and from youth group, caught his eye and the couple was united in marriage on May 26, 1984 at their church, St. John Lutheran, in State Center. The couple lived on the family farm in rural Gladbrook before settling down back in State Center in 1990. Together they raised their three children and built a beautiful life together.

Frank was a truckdriver all of his career, most recently at Mid-State Milling. All his long hours on the road led to a deep appreciation of many types of music and an enjoyment of talk radio. In his free time, he enjoyed old cars and trucks, snowmobiling, camping, boating and trips to the Ozarks. More than anything, he loved spending time with his family and especially found joy in his kids and grandkids.

Left to cherish his memory is his bride of 38 years, Cindy; three children: Lindsay (Stephen) Adams of State Center, Jared (Erica) Knights of Stuart and Rachel (Trevor) Long of LeGrand; his precious grandchildren: Hank, Brooke and Nicholas Adams, Charlee, Audrey and Jackson Knights and Hazel Long; his siblings: Karen (Matt) Koenig of Hampton, Dan (Darcy) Knights of Waverly and Russ Knights of Pella and many extended family members on both sides of the family.

In eternal life he is reunited with his father Charles Knights, his mother Donna Papenberg and his grandparents.

Funeral services for Frank will take place on Saturday, December 10 at 10:30 AM at the Mitchell Family Funeral Home in Marshalltown. Friends and family are also invited to attend a visitation on Friday, December 9 from 5:00 P.M. to 7:00 P.M. also at the Mitchell Family Funeral Home in Marshalltown. Frank’s family encourages all attendees to wear casual attire and bibs are welcome. He will be laid to rest at Hillside Cemetery in State Center. Memorial donations can be directed to the family for later designation. For more information or to leave a condolence, please visit www.mitchellfh.com or call 641-844-1234. 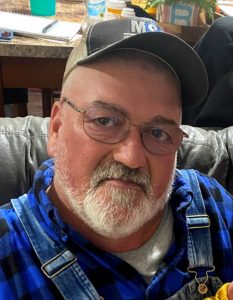