Wilma was born March 6, 1930 to Carroll and Eva (Pool) Andrews at home in Marshall County, Iowa. She was the second oldest of six children, three brothers and two sisters. She grew up in Ferguson and graduated from Ferguson High School in 1947. She met Russell Geddes at a Rural Youth dance and they were married on June 12, 1949 at the Binford House in Marshalltown.  They resided with his parents until 1950 and moved to a farm southeast of Marshalltown. In 1952 they rented a farm north of Melbourne and raised their four daughters there. In 1968 they purchased a farm one mile east of their rented farm, where they resided from 1975 until 2015. Wilma farmed alongside her husband for 50 years. Throughout her life she was active in the Rural Youth Organization, New Horizons United Methodist Church in Melbourne, United Methodist Women and Marshall County Pork Producers. She enjoyed square dancing, listening to music, gardening, flowers, and she had a special love of hummingbirds, cardinals, and pansies. She crocheted afghans for all the grandchildren and in her later years she made crocheted potholders for numerous people. Because of her love for baking, many people were the recipients of her delicious honey wheat bread. She had a gift for visiting and caring for friends and relatives who were ill.

The family would like to thank the Southridge Nursing Home for the care of their mother and the help of Care Initiatives Hospice. 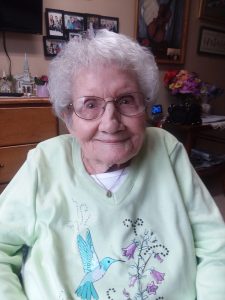