Dewey Milo Dennis, 88, of State Center, passed away on Wednesday, September 28, 2022 at his home and under the care of Suncrest Hospice.

Memorial services for Dewey will be held on Sunday, October 2nd, 2022, at First Presbyterian Church in State Center. Memorials may be directed to the family and later designated in Dewey’s honor. For more information or to send a condolence, please visit www.mitchellfh.com or call 641-844-1234. Mitchell Family Funeral Home is caring for Dewey and his family.

Dewey Dennis was born on September 11, 1934 in Fontanelle, Iowa to George W. and Elma E. (Glasser) Dennis. He graduated from Fontanelle High School in 1952. Dewey also attended an Electronics Program in Des Moines, a Telegraphy Program in Minnesota, Barber College in Des Moines, and Marshalltown Community College. Dewey served his country honorably in the United States Army. On April 15, 1956, Dewey was united in marriage to Barbara Sue Hinds in Greenfield, Iowa. They made their home in North Carolina, Indianola, Iowa and Des Moines, before calling State Center home in 1961. Dewey had worked for the railroad doing telegraphy. He also owned and operated his own barber shop in Des Moines and State Center and worked at Dennis Straw Company, baling hay and grain straw in Iowa and South Dakota. Dewey was a loyal and faithful member of the First Presbyterian Church in State Center. He enjoyed building control lined gas engine model airplanes and repairing televisions, radios and clocks. He also liked watching Westerns; McLintock! being a favorite, training dogs and liked to travel and work as a truck driver for Sully Transportation.

Dewey is preceded in death by his parents, George and Elma; infant son, Michael Jay; two brothers; one sister and a brother in law. 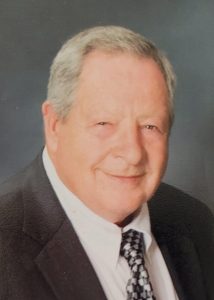