Hugh “Butch” Fuhr, 84, of Marshalltown, Iowa, passed away on Thursday, September 15, 2022 at UnityPoint Health – Marshalltown.
Services for Hugh will take place on Thursday, September 22 at Our Savior Lutheran Church in Marshalltown. He will be laid to rest at Rose Hill Memorial Garden with military honors provided by the combined VFW/American Legion of the surrounding area. A visitation will be held the night prior on Wednesday, September 21 from 5:00 to 7:00 P.M. at Our Savior Lutheran Church. In lieu of flowers, memorials may be directed to the family for later designation. Mitchell Family Funeral Home has been entrusted with the care of Hugh and his family. For online condolences, please visit www.mitchellfh.com. Ph 641-844-1234.

Hugh Dean Fuhr was born on September 11, 1938 to Conrad and Lottie (Kirkland) Fuhr in Missouri Valley, Iowa. After graduating from Missouri Valley High School in 1956, he honorably served in the United States Army until 1958.

He saw the love of his life, Shirlee Timmerman, on a bike ride, asked if he could take her out and they have been inseparable ever since. They were united in marriage on August 20, 1966 at Trinity Lutheran Church in State Center. They lived together 54 years in the house they built themselves on an acreage south of Marshalltown with breathtaking farmland views.

Hardworking and dedicated, Hugh worked for over 37 years for Marshalltown Community Schools. The couple spent the last 22 winters of their retirement in Mesa, Arizona. He was a faithful and active member of Our Savior Lutheran Church in both Marshalltown and Mesa. Hugh enjoyed yard work, farming, gardening, playing golf and ballroom dancing. He was a simple, content man who loved his wife and the life they built together more than anything else in the world.

Left to cherish his memory is his beloved wife of 56 years, Shirlee Fuhr; his sister-in-law Cleta Fuhr; brother-in-law Lloyce (Mary) Saltzman; several nieces and nephews and numerous great-nieces and great-nephews.
In eternal life he is reunited with his parents, three sisters and three brothers. 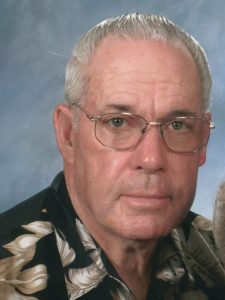