Harry “Bud” Trowbridge Jr, 89, of West Des Moines, and formerly of State Center, Iowa, passed away on the morning of Sunday, September 4, 2022 at MercyOne Medical Center in Des Moines, Iowa, with his family at his side.

A Funeral Mass for Bud will take place on Saturday, September 10, 2022 at St. Joseph’s Catholic Church in State Center, Iowa, beginning at 10:30 A.M. A visitation for family and friends will be held on Friday, September 9, 2022 from 5:00 to 7:00 P.M. at the Mitchell Family Funeral Home in Marshalltown, Iowa. Memorials in Bud’s name may be directed to Boys Town of Omaha. For additional information or to send a condolence to the family please visit www.mitchellfh.com or call 641-844-1234. Mitchell Family Funeral Home is caring for Bud and his family.

Harry J. Trowbridge was born July 22, 1933 to parents Harry B. and Adaline (Nowlan) Trowbridge in Mount Vernon, Illinois. He attended school in Rhodes, Iowa where he received his High School Diploma. Following his schooling, Bud enlisted in the United States Air Force where he began his 20-year service to his country and served during multiple wars. During this time, Bud met Marie Krause and they were later united in marriage. Together they began a family of their own raising their four children. They called State Center, Iowa home and were members of St. Joseph Catholic Church. Marie later passed away in August of 2007. They celebrated 53 years together. In July of 2009, Bud was united in marriage to Sharon (Day). They moved to West Des Moines where they have resided for many years.

In his free time, Bud loved to farm, work outside, tinker around in the shed, watching western films, reading his Louis L’Amour western books, watching TV, cheering on ALL the Chicago sporting teams, and watching the Iowa Hawkeyes. His favorite quote to tell people was that, “he had the best life.” Above all, he loved his family more than the world itself and he would cherish all the time he was able to spend with them, going to his grandchildren’s sporting events, and all the Sunday dinners.

He was preceded in death by his first wife, Marie Trowbridge; his son-in-law, Dave Grice; his parents Harry B. and Adaline Trowbridge, his siblings, Paul Trowbridge and Terry Lane; his sister-in-law, Bonnie Trowbridge; and his nephew David Rohrer. 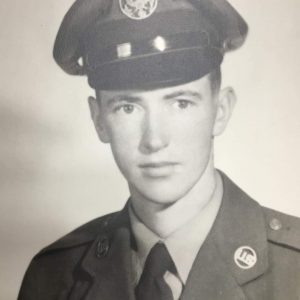