John was born in Freeport, Illinois where he was raised by his parents, Arthur and Mardelle. As a Pretzel, he starred in football and baseball, performed in school productions, and was the Illinois State Debate Champion. He attended the University of Iowa and served as a Lieutenant in the Army.

John worked as a broadcaster for several radio stations before landing at WOI-TV in Ames. At WOI, he played the role of Esmeralda on Gravesend Manor, a wonderfully kitschy show that exemplified early 1960’s television. He was the play-by-play radio announcer for the Iowa State Cyclones and emceed numerous Cyclone Club banquets. John performed in many television and radio commercials. As a master of ceremonies, he often played the character “Aunt Flabby” where his comedy would have audiences howling with laughter.

John was an exemplary citizen of Ankeny, a city he loved. He served several terms as a city council member and was elected Mayor where he played a pivotal role in the development of the Ankeny known today. John is recognized by many as the voice of the Ankeny Hawks announcing football, track, and basketball games for decades. He was awarded Citizen of the Year by the Chamber of Commerce in 1987.

John met Mary Bess Nichols at WOI-TV giving her the nickname Nicki. The nickname and John would stick with her the remainder of her life. John and Nicki originally lived in Ames where their daughter Nancy was born. They moved to Ankeny in 1968. Their son, Jim, was born shortly after. John and Nikki enjoyed vacations, playing golf, and time together at the lake house.   Nicki died in 2007 breaking John’s heart. As a father, John was remembered for “crock-a-gator” games in the living room and as a championship little league coach. He is a grandfather of five:  Jonathan (Samantha), Joe, Jack, Anna, and Charlie. Other family members include son-in-law, Brad; daughter-in-law, Mindy; siblings-in-law, Robert and Gloria; and niece, Stephanie Nichols. He shared many life-long friendships filled with cocktails, antics, and laughter.  In his final act, John enjoyed finding deals at the grocery store, reading the newspaper, solving crosswords, and long rides around central Iowa.

In lieu of flowers, memorials may be directed to the family. 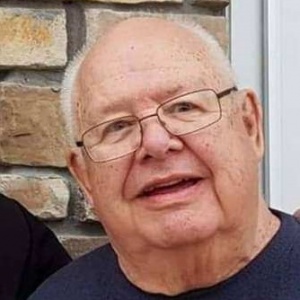