Wyatt Varnum, age 31, of State Center, passed away suddenly on the morning of Thursday, July 21st, following a house fire in their family home.

A Celebration of His life and remembrance under the direction of the family will be held on a date to be announced. A fund raiser will be held at the State Center City Park across from the high school on August 4th, starting at 5:00 p.m. Wyatt resided with his parents and their family has lost everything. For condolences, please visit www.mitchellfh.com. 641-844-1234.

Born on February 3rd, 1991, in Des Moines, he was the feisty, little three pound baby (and only child) of Michael and Donna (Schneider) Varnum. He grew up in State Center- many days on the skate park- and graduated from the West Marshall High School in 2009. He then attended MCC.

For many years, he was a semi-pro skateboarder and mentored to others younger. He was a lifeguard and professional drummer acquiring music friends all over the world. Wyatt had a soft heart for other people- always willing to help them.

He is survived by his parents Michael and Donna and his faithful furry companion, Gizzy, and other family members.

Wyatt- your mom says “Play your drums for God. We love you.” 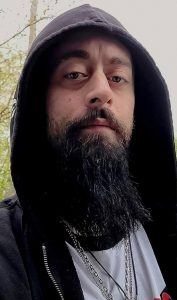