Per the wishes of Bill and his family, cremation rites were accorded. Memorial services took place on July 28th at the Mitchell Family Funeral Home with Pastor Bobby Shomo officiating. Full military honors were provided by the combined VFW/ American Legion Honor Guard of the surrounding area.

Born William Henry Seeger on February 23, 1926 in State Center, Iowa, he was the son of William C. and Alma M. (Uhlendorff) Seeger. After his graduation from State Center High School, he joined the United States Navy, serving honorably during WWII. Upon his return home, he worked hard and made a name for himself in State Center. He married the former Cathryn Whitlow in 1949 and they raised their two children, Brian and Jennifer.  Bill first worked as a mechanic at the Ford garage before going on to build many houses in State Center. He was an extremely talented carpenter and enjoyed woodworking. Bill truly was a “Jack of all Trades,” always willing to help and he could make something out of nothing. He also served the community as mayor and fire chief. Prior to his retirement, he dedicated 11 years to the Marshall County Care Facility.

He married his angel on earth, Mary Jo Bryant, on November 07, 1980. The couple relocated to Marshalltown in 2010 and spent the rest of their years together there. In their early years, the couple enjoyed camping together, trips in their RV and riding motorcycles. Throughout his life, Bill enjoyed spending time in the outdoors, especially fishing. In his free time more recently, he liked doing crossword puzzles and playing Words with Friends. He liked sports and was an avid Iowa State University fan. Most importantly, Bill loved spending time with his family. They lovingly described him as caring and funny – an overall positive spirit. He will be deeply missed by all those who knew him.

Bill was preceded in death by his former wife, Cathyrn Seeger, his son, Brian Seeger; his parents and his brother, Vernon Seeger.

Memorial contributions may be directed to the Animal Rescue League of Marshalltown, Iowa River Hospice or a charity of your choice. 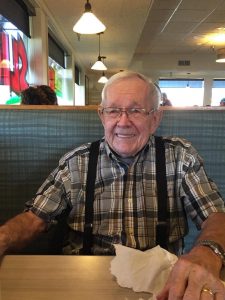