In Loving Memory of….

Ruth Evelyn (Beggs) Failor was born on July 30, 1931, in Sioux City, Iowa to Vivian Irene (Cobb) Beggs and John Elroy Beggs, their third child. She was born premature, weighing just under four pounds at birth. She was strong-willed and determined from the start. Ruth survived birth but not without subsequent complications. Due to her small size, she was placed in an incubator. She was given an excessive amount of oxygen which severely damaged her eyes. She could see only colors until the age of twelve. A little over a month after her birth her father was hospitalized with broken ribs caused by a car accident where he died from pneumonia in September 1931. Her mother was raising three children working long days and felt it best for Ruth to go to the blind school. Even though her grandfather Asa Cobb was initially against her being sent away, Ruth went to boarding school at the School for the Blind in Vinton, Iowa starting at the age of eight years old through high school. During the summers she would come back to Sioux City mainly living with her grandparents, Asa and Grace, until they were unable to look after her. Some of her fondest memories growing up with her grandparents were when she would sit with her grandfather listening to radio programs together and when she attended Mrs. Violet Miller’s Sunday School class at the Central Baptist Church in Sioux city. During this time, she entered a contest where students had to memorize multiple bible verses. She was the only one in her class to do so. She won the grand prize of a print bible. Her grandma Grace Cobb helped her to memorize the verses. After high school, where she met life-long friends, she lived with her mother while working for Good Will. During that time she met Martin Failor though mutual friends. They married August 22, 1959, in Rhodes, Iowa in the home where Martin had lived since age 14. They were nearly married for 50 years. Ruth loved many things. First, she loved the Lord, her family, and her friends. She also loved to talk on the phone. If you were one of the lucky ones, Ruth always had something to talk about. She loved to read, watch old-time movies, and listen to the Iowa State boys’ basketball games. Ruth was a musician, loving to sing and play piano. In fact, her talent led her to writing two worship songs. She enjoyed going places to shop, eat and visit, but was happy to be at home. Ruth was a member of the American Council for the Blind and the Friends of the Iowa Library for the Blind. Ruth passed away peacefully at age of 90 years and 9 months, with her children by her side, on Saturday, April 30, 2022.  She took on life in ways most people will never understand or could begin to comprehend. She was a brave and sweet person who loved her husband, children, grandchildren, and great grandchild. She loved us unconditionally and we loved her with all our hearts. She will be missed more than anyone can know. Those left to cherish her memory are her children: Gayla Failor (Eric Hulbert) of Rhodes, IA, Craig (Carmel) Failor of Oak Park, IL; her five grandchildren, Allie Nancarrow of Brighton, ENG., Emily Nancarrow (Connor Jones) of Buena Vista, CO, Graham (Amber Bell), Braley and Evan Failor all of Oak Park, IL.; her great-granddaughter Karsyn Failor who she was thrilled to meet and hold. Her brother-in-law Gene (Margaret) Failor, TN. In death, Ruth now rejoins her loved ones; her grandparents Grace and Asa Cobb, her parents Vivian and John Beggs, her husband Martin Failor, her brother John “Jack” Beggs Jr. whom she lost way too soon, her sister Juanita and bother-in-law Paul Hoeppner, her brother-in-law Stewart Failor, sister-in-law Carol Ann Failor and niece Ellen Failor. May they rest in peace. Services for Ruth will be held on Wednesday, May 4,2022 beginning at 10:00 A.M. at the Mitchell Family Funeral Home. Memorials in Ruth’s honor may be made to The Friends of the Iowa Library for the Blind and Physically Handicapped, at FrndsLibBlindPH@gmail.com. For condolences, please visit www.mitchellfh.com or call 641-844-1234. 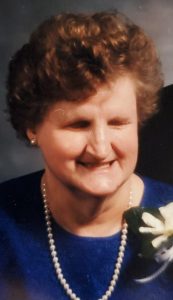