Services for Bob will be held on Thursday, April 28, 2022 beginning at 10:30 am at St. Francis of Assisi Parish: St. Henry Catholic Church. A visitation for family and friends will be held on Wednesday, April 27, 2022 from 5:00 to 7:00 P.M. at the Mitchell Family Funeral Home. Burial will be in Riverside cemetery. In lieu of flowers, memorials may be directed to your choice of charities. For additional information or to send a condolence to the family please visit www.mitchellfh.com or call 641-844-1234.

Robert Neil was born at St. Thomas hospital in Marshalltown to Wilbert (Bill) Mantle and Ruth Irene Johnson Springer on February 24, 1928. He attended schools in Albion, Cedar Rapids and Marshalltown. He graduated from Marshalltown High School in 1946. While in high school Bob played a clarinet in the band and participated in football and track.

He enlisted in the US Navy following graduation and was honorably discharged in 1948. That fall he attended Drake University. In 1949 he began working as a manager at the Tremont Cigar Store. In 1964 he worked as a sales representative for Marshall Office Supply and he retired in 1992. Then he worked part-time with Central Office Supply and again retired in 2011 at the age of 83.

Bob was a member of St. Henry’s church and he and his wife served as ushers for several years. He had been a member of the Marshalltown Elk Lodge #312 and held many offices including Exalted Ruler two times. He was a lifetime member of the Knights of Columbus 4th degree.

He enjoyed playing golf and had been a long-time member of the Lincoln Valley golf course. For several years he organized the teams for the Senior Men’s group on Wednesday mornings to play best ball. He was very excited when he got his first hole-in-one in 2010.

Bob liked to read, watch TV, play card games and be with family and friends. Bob also collected logo golf balls. He had a collection of over 3,000 balls from many golf courses. He also collected stamps and he had filled many albums.

Bob loved to travel. When the children, Mark and Mary, were young they bought a travel trailer and went to a lot of camping sites. Their favorite spot was in the Snowy Range Mountains west of Laramie, Wyoming. They fished for trout and went hiking on the mountain trails. Later they purchased a vacation house in Bella Vista, Arkansas. They had a lot of fun playing golf on the different courses located there.

They visited all 50 states including Alaska twice and Hawaii several times. They also were in Canada, Mexico, Europe, the United Kingdom, Ireland, Australia, New Zealand and Costa Rica. There were ship cruises to some of the Caribbean Islands and through the Panama Canal to San Diego.

He is survived by his wife, Louise, of 69 years; his son and wife, Mark and Colleen Springer; and daughter, Mary and husband Dennis Hass; all of Marshalltown. Two grandsons, James Hass of Carroll and Lewis Hass of Marshalltown. Alongside numerous nieces, nephews, cousins and other extended family members. 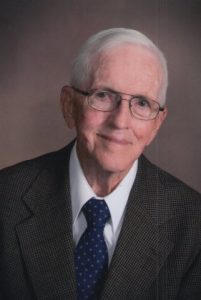