Eugene Goodman was born January 24, 1932, at his grandmother’s house in Melbourne, Iowa, to Clarence and Ida (Bollenbacher) Goodman. He attended Melbourne Consolidated School, graduating with the class of 1950. Eugene was President of the Senior Class. He was proud of having played on the Melbourne football, basketball, and baseball teams. Eugene married Jean Denison, January 25, 1951, in Council Bluffs, Iowa. From this union two children were born, Julie and Jill. Eugene honorably served in the US Army from February 1952 until February 1954. Eugene was a life member of the American Legion, life member of the Veterans of Foreign Wars and life member of the Amvets.

Eugene started farming in March of 1955, and he loved raising cattle and farming. He showed sheep and cattle when he was in 4H. Besides farming, Eugene drove a school bus for the Melbourne Consolidated School District and the West Marshall School District for nine years. He also worked at Lennox Research and Development Lab for twelve years in the Commercial Department until they moved to Texas, then he worked at Fisher Controls in the tool crib for three years as a gauge setter. He worked at the Iowa Veterans Home as a security guard for ten years until his retirement. He retired from farming at the end of 2015. He was a board member of 1st Community Credit Union for 25 years and a long time member of the Farm Bureau. He lived in rural Melbourne most of his life. Eugene was a member of Trinity Lutheran Church. He loved dancing and working in his garden. He also enjoyed watching Iowa Hawkeye sports and loved watching his children and grandchildren play sports.

Left to cherish his memory are his wife, Jean (Denison) Goodman; children, Julie (Matt) Randall and Jill (Terry) Shaffar; ten grandchildren; fourteen great-grandchildren; and many friends and other family. He is preceded in death by his parents; and brothers, Duane Goodman and Valjean Goodman. Online at www.ankenymemorial.com 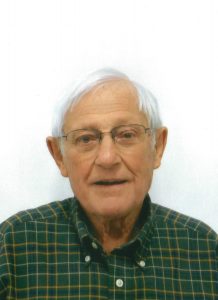