The sparkling and bright personality of Barbara “Barb” Bodie, 90, lifelong resident of State Center, has returned to the arms of her Heavenly Father and beloved husband on Sunday, January 16, 2022 at The Willows of Marshalltown. She was under the care of St. Croix Hospice.

Born Barbara Mulcahy on October 27, 1931 in State Center, she was the daughter of Frank and Mary (Pfantz) Mulcahy. Barb was very smart and graduated from State Center High School with the class of 1949. Shortly after, she met the love of her life, Ivan “Ike” Bodie and they were united in marriage on June 3, 1950. They were blessed with the birth of two sons, Steven and Bruce.

Barb was excellent in the kitchen – mastering the art of cooking and baking from scratch. She was a strong, hardworking woman and a loving and devoted wife and mother. Barb also worked outside the home, dedicating over 15 years at GTE Telephone Company, followed by working in the office of Dr. Robinson and Dr. Sokol, the dental practice of Dr. Kimm and later for Community Nursing Services. In retirement, Barb and Ike wintered together in Texas and celebrated 65 years of marriage before his passing in 2016.

Barb had personality galore – she was hospitable, always smiling and had a contagious laugh. She loved her family, her friends, her community and her church. She was an active member of St. Paul Lutheran Church, where her legacy will live on through her musical talents and the strong faith that she shared with all. She was a member of the Eastern Star and Delta Nu Study Club, as well as actively involved in the annual Rose Festival and queen candidate selection.

Barb had a zest for life and enjoyed many things, including Christmas trees, bloody beer, Iowa State, her bird feeder, Tom Brady and “The Sound of Music.” She also had a deep love of cats, doting affectionately on all the kitties that came through her home, including her beloved grand-cats. She was a light in a dark world and will truly be missed by all those whose lives she touched.

We would like to extend our gratitude to The Willows of Marshalltown and to St. Croix Hospice for their exceptional care given to Barb and her family. 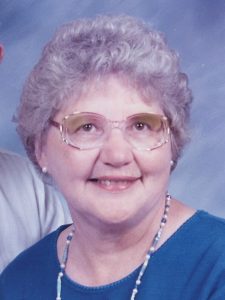