Funeral services will be held at 2:00 p.m. Saturday, January 15th, at the Mitchell Family Funeral Home in Marshalltown. Visitation will be from noon until service time. To honor Danny’s memory, the family encourages you to dress casually- jeans with John Deere green and yellow shirts. For condolences, please visit www.mitchellfh.com. Ph. 641-844-1234.

Danny came into this world on September 7th, 1946, in Osceola, Iowa, the son of James and Mildred (Smith) Tuttle. When he was 10, the family moved to Rhodes. He received his education in the Rhodes Public Schools and was a member of the first graduating class of the West-Marshall High School.

For nearly 40 years, Danny worked at Fisher Controls. He also farmed his home place. He dearly loved to see his grandchildren take up a love of farming and being involved in 4-H. His family was his biggest treasure in life. He enjoyed playing cards (especially Pepper), his cats, crossword puzzles, solving the world’s problems over a cup of coffee, watching football and supporting ISU and Iowa (even though that might divide the rest of his family!), and tending to cattle. Anyone who knew Danny was well aware he bled green and yellow. From full sized John Deere tractors to his miniatures in the house, John Deere was in his spirit. Even people who were fans of red tractors said they would wear green to his funeral because he was such a good guy!

At a ballgame in Melbourne, Iowa, over a glass of beer and the “prompting” of Sam Halter, he met the love of his life, Diana Stehm. He later proposed in a somewhat “non-traditional” way to Diana and the two were united in marriage on May 14th, 1988, at the Steak Center in State Center. This began a life of laughter, hard work, love of family and great companionship.

In death, he rejoined his son, Patrick, who passed five years ago, his parents James and Mildred, his brother Jerry and sister Karen Groves. 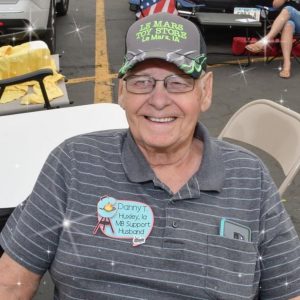