Lynn Harrell, 62, of Marshalltown, Iowa, passed away on the evening of December 30, 2021 in the comfort of her own home.

Services for Lynn will be held on Thursday, January 6, 2022 beginning at 11:00 A.M. at Trinity Lutheran Church in Marshalltown. A visitation for family and friends will be held on Wednesday, January 5, 2022 from 5:00-7:00 P.M. at the Mitchell Family Funeral Home. Memorials may be directed to the family for a later designation. For additional information or to send a condolence please visit www.mitchellfh.com or call 641-844-1234. Mitchell Family Funeral Home is caring for Lynn and her family.

On June 10, 1977 she was united in marriage to Jeffery Harrell in Marshalltown, Iowa. Together they raised their two kids Shaness and Jeffery. They later separated but still remained friends with one another. Lynn worked many years as one of the courteous smiles at Fareway until her retirement in 2021.

In her free time, Lynn enjoyed going out to eat, spending time with friends, taking trips to the casino, going to Iowa Wild Hockey games, and supporting her grandkids in whatever sports that they were in. She was always their #1 fan. She enjoyed in her younger days going horseback riding and spending summers at her grandparents in Minnesota. She was a genuine soul who loved life, had a great personality, and didn’t know a stranger.

She was preceded in death by her father George and her paternal and maternal grandparents. 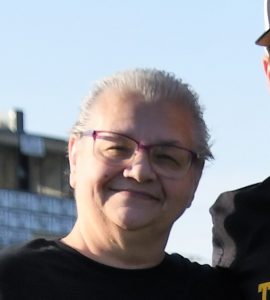