Greta J. Benson, 87, of Lamoille (rural State Center), passed away peacefully on Sunday, December 26, 2021 at The Willows of Marshalltown under the care of Iowa River Hospice. She was surrounded by her oldest daughter, granddaughter and great-granddaughter, representing four generations and her beautiful legacy.

Private family funeral services will take place with Pastor Terry Collins officiating. She will be laid to rest at Elmwood Cemetery in Lamoille. Mitchell Family Funeral Home has been entrusted with the care of Greta and her family. Memorial contributions may be directed to the family for later designation. For questions or condolences, please visit www.mitchellfh.com or call 641-844-1234.

Born Greta Joan Gunderson on February 1, 1934 at home in Marshalltown, she was the daughter of Harold and Violet (Miller) Gunderson. One of four children, she grew up in Marshalltown and attended Marshalltown High School. She was united in marriage to Corporal Ross Hartwig on March 12, 1951 and from this union came her first daughter. Ross lost his life serving his country during the Korean War. Later, Greta met James “Jim” Benson and she was blessed with a second love of her life. They were united in marriage on June 10, 1954 at the Little Brown Church in Nashua. Together they made their home in Lamoille, where they raised their seven children.

Greta was an excellent cook, both at home for her family and also by trade. She had a long career as a cook at West Marshall High School, State Center Manor and Marshall County Care Facility, until its closing. Greta was a kind and devoted wife and mother, who loved supporting her family and making sure everyone was taken care of more than anything else. She enjoyed following her children and grandchildren in their many activities over the years. She was light-hearted and had an ability to not take things too seriously. Greta was a member of the Lamoille Congregational Church, actively helping and leading in many areas including women’s fellowship, couples small group, pilgrim fellowship, candy committee and as a youth leader. She kept busy as a member of the Red Hat Society, Marshalltown Bowling League and JT Club. She also enjoyed playing golf at Lincoln Valley and playing Bingo at Meskwaki Casino.

In eternal life she is reunited with her parents, Harold and Violet; first husband, CPL Ross Hartwig and her siblings: Robert Gunderson, Doris Hartwig and Gloria Baughman.

The family would like to thank the staff of The Willows Memory Care Unit and Iowa River Hospice for their exceptional care and kindness toward their mother. 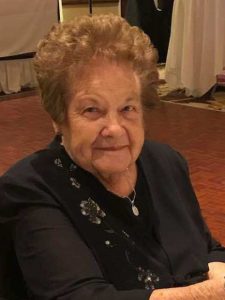