Mary Cleo Schulte, 92, of Geddes, SD passed away Sunday, October 31, 2021 at Platte Health Center Avera in Platte, SD. Funeral Mass is 10:30 AM Saturday, November 6, 2021, at St. Ann’s Catholic Church in Geddes. A Committal Service will follow at St. Ann’s Catholic Cemetery. Visitation will be held at the church from 5:00 – 7:00 PM Friday, November 5, 2021, with a 7:00 PM Wake and Rosary Service. Father Thomas Clement will officiate. Mount Funeral Home of Platte is assisting with arrangements. Expressions of sympathy may be extended to the family through mountfuneralhome.com. The Funeral will be live streamed under “Photos and Videos” on the funeral home website (Webcasting) and through “Mount Funeral Homes” Facebook page.

Mary Cleo O’Brien was born on March 10, 1929, to Edward and Anna (Leddy) O’Brien and grew up in rural Armour, SD. Upon graduating from Armour High School, Cleo attended summer teacher’s training in 1947 and began teaching in rural Douglas County, driving her Model T. Cleo married Lawrence Schulte on December 29, 1949, in Geddes, SD. They farmed near Geddes until 1989 when they moved to town, allowing their son to take over the farm.

Cleo and Lawrence were blessed with three daughters and eight sons. Cleo was known for her gentle spirit, strength and humor. She was always working, both inside the house and on the farm, and could be found baking, milking cows, tending her garden, or raising chickens, Cleo was also an excellent businesswoman, owning and managing the Red Oak Bar for several years.

She was dedicated to her church and community where she was active in the St. Ann’s Altar Society, Civic Club and the Geddes Historical Society. Cleo also served as a 4-H Leader. She was always willing to help by providing a pie or some other dessert. She enjoyed playing pitch with her friends, crocheting and baking, although she rarely followed the recipe. Her cinnamon rolls never failed to quickly disappear especially with her large family around. Above all else, Cleo was so proud of her children, grandchildren, and great-grandchildren.

She was preceded in death by: her husband (Jun. 27, 2015); parents; three brothers: Bernard Patrick, Raymond, Merlin and Jack O’Brien; and sister, Rita Ayers. 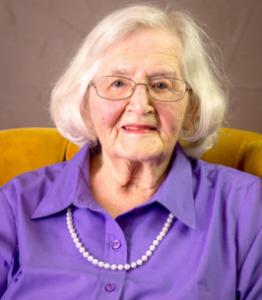