Services for Junior will take place on Monday, October 25 at 10:30 A.M. at the Mitchell Family Funeral Home in Marshalltown. A visitation will be held Sunday, October 24 from 2:00 P.M. to 4:00 P.M., also at the Mitchell Family Funeral Home. He will be laid to rest at Hillside Cemetery in State Center following services. Memorial contributions may be directed to the family for a memorial at Lincoln Valley Golf Course in Junior’s name. For additional questions or to leave a condolence, please visit www.mitchellfh.com or call 641-844-1234.

Junior was born June 16, 1938 in Spooner, Wisconsin to parents Lloyd Sr. and Evelyn (Jay) Kern. After his graduation from high school and several college classes, he joined the United States Navy and honorably served from 1957-1961. He married the love of his life, Carolyn Leckness on January 12, 1962 in Albion, Iowa, where they raised their family.

Junior dedicated many years to Fisher Controls before his retirement in 1994. He then worked for Marshall Coach delivering Winnebagos for several years.  He kept busy in the community as a member of the American Legion, the UAW 893 in Marshalltown, the Iowa Valley Firefighters Association and the Lincoln Valley Golf Course in State Center. Junior was an avid golfer and loved to travel and play cards, especially cribbage. He was a big sports fan, cheering on the Green Bay Packers, the Chicago Cubs and the Iowa Hawkeyes. Junior also loved listening to Willie’s Roadhouse Country Music station on XM radio. 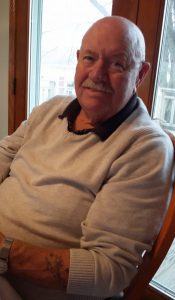