Steve was born on March 23, 1948 to Herman and Maxine (Chance) Wildeboer in Des Moines, Iowa. He grew up in Zearing and graduated from NESCO High School with the class of 1966. After high school he attended the United Electronics Institute where he earned his 2-year degree. Steve married the love of his life, El Jean Twedt on November 22, 1969 at Bethany Lutheran Church in McCallsburg, Iowa. The couple lived on the Wildeboer farm at the south end of Zearing until the moved to their current home in March of 1970. Steve was a farmer and loved working the land. Steve was very active in Zearing and the NESCO and Colo-NESCO Community Schools. He coached is kids in basketball and never missed a game in their school and college careers. Steve played a very active roll in building the Veteran’s Memorial Ballfields in Zearing. He was on the Zearing Park and Rec Board, the Minerva Valley Telephone Board, the NESCO Health Board, and was a daily smile and storyteller at the Zearing Coffee Club. Steve enjoyed spending time with his family, farming, playing cards, fishing, watching the Hawkeyes, watching sports, and spending time with his grandchildren, great-grandchildren and of course his faithful dogs.

Fredregill Funeral Home has been entrusted with the care of Steve and his family. 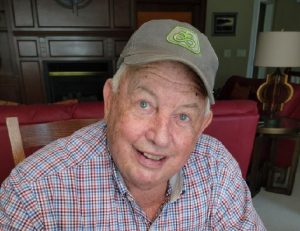