William “Bill” Hartwig, age 82, longtime Conrad resident, passed away in the comfort of his home with family at his side on the morning of Saturday, September 25th, while in care of the Iowa River Hospice. A memorial gathering to honor Bill’s life will be held from 1:00 p.m. to 3:00 p.m. on Saturday, October 2nd, at the Mitchell Family Funeral Home in Marshalltown. The family encourages casual dress. Private family interment rites will be in the Hillside Cemetery at State Center. For condolences, please visit www.mitchellfh.com. Memorials may be directed to his family to continue his legacy. Ph. 641-844-1234.

Born William E. Hartwig on December 4th, 1938, in State Center, he was the son of Alvin and Loraine (White) Hartwig. He received his education in the area of his birth.

On March 14th, 1958, at the Trinity Lutheran Church in State Center, he was united in marriage to Linda Warner. The young couple made their home in State Center where he served the town faithfully as an associate police officer. In 1962, Bill took a job for the City of Conrad serving as a part-time police officer and also the street department.

In 1966, Bill established Hartwig Trenching and Trucking. In 1970, he stopped working for the city as his business grew rapidly, and became Bill Hartwig Excavating. He loved what he did and involved his children in many of the activities. Besides heavy equipment work, he assisted many local families and funeral homes in laying their loved ones to rest by opening graves- sometimes in the heat of summer or the depth of the winter cold.

Bill loved his family. He treasured every moment with them. When Chuck asked him for his daughter’s hand in marriage, Bill quickly replied “Yes. But you can’t bring her back!” He had a knack for teasing and pranking people and those who knew him know he told it like it was. He loved his occupation and had it down to an art, turning heavy pieces of machinery on a dime. The Casey’s in Conrad will be quiet with his absence as he loved to solve to problems of the world with his friends in the morning sitting at the front tables. He also enjoyed the early service at Christ Lutheran in Gladbrook where he transferred after Trinity Lutheran in State Center. 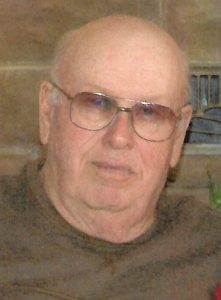