The kind and generous soul of Eileen M. Horn, 97, of Marshalltown, formerly of Melbourne, passed away on Monday, September 20, 2021 at the Iowa Veterans Home.

Per the wishes of Eileen and her family, cremation rites have been accorded. A graveside memorial service will take place on Friday, September 24 at 3:00 P.M. at Melbourne Memorial Gardens with Cathy Conkin officiating. Memorial funds are being established and may be directed the family for later designation. Mitchell Family Funeral Home has been entrusted with the care of Eileen and her family. For questions or condolences, please visit www.mitchellfh.com or call 641-844-1234.

Born Eileen Mae Olmstead on September 26, 1923 in Marshalltown, she was the daughter of Wayne Sr. and Doris (Quimby) Olmstead. She grew up in Marshalltown, graduating from Marshalltown High School in 1942. After meeting the love of her life, Eldon W. Horn, they were united in marriage on April 18, 1943. Together they made their home in Melbourne, where they raised their five children. In addition to being an excellent homemaker, wife and mother, Eileen worked several administrative assistant positions, including for Monsanto, Farm Services, Geerling’s Feed, her husband’s feed business. Before retiring, she also worked for the flower shop at Riverside Cemetery.

Eileen was a member of the American Legion Auxiliary and the Methodist Church in Melbourne, including the Methodist Women’s Club. She enjoyed cooking, sewing and gardening. She loved being a mom and grandma and she especially enjoyed babies and spending many weekends and summers with her grandchildren. Eileen collected teddy bears, spoons from her travels, owls and bells and she enjoyed watching hummingbirds. Described by her family as loving and witty, she will be deeply missed by all those whose lives she touched.

In death, Eileen is reunited with her beloved husband, Eldon; her parents, Wayne Sr. and Doris; her brother, Wayne Olmstead Jr., two brothers-in-law and her sister-in-law. 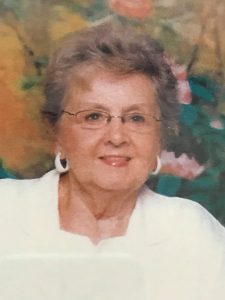