Per the wishes of Tim and his family, cremation rites have been accorded. Services for Tim will take place on Saturday, September 4 at 10:30 A.M. at St. Paul’s Lutheran Church in State Center followed by a reception at Lincoln Valley. Friends and family are also invited to attend a visitation on Friday, September 3 from 4:00 to 8:00 P.M. at State Center Fire and EMS. Tim’s family requests that all attendees wear Cyclones or Cardinals gear, cattle shirts or any other casual attire. For additional questions or to leave a condolence, please visit www.mitchellfh.com or call 641-844-1234.

Born January 20, 1980 in Marshalltown, he was one of two children of Douglas “Doug” and Claudia (Paper) Butler. He graduated from West Marshall High School in 1998 and went on to attend school at Hawkeye Community College. Growing up on the family farm, hard work was something instilled in Tim from an early age. He worked for Edler Brothers, farmed with his dad and had a real knack for livestock, especially Hereford cattle.

After meeting at the Marshall County Fair at age 16, he fell in love with Chris Ohrt. They were “high school sweethearts from different high schools” and spent their time together baling hay, attending cattle shows and watching “bad” movies. They were united in marriage on July 1, 2001 at the Marshalltown First United Church of Christ. Together they raised their two children in State Center, who were everything to Tim. He was very proud of his kids and enjoyed attending their sporting events and showing cattle together.

Tim was a fearless member of the State Center Fire Department, serving in the position that his dad previously held. Not only did he help people every chance he got, he also saved many people both on and off duty. A man of integrity, Tim believed in doing the right thing without recognition and was passionate about his community. He was always thinking of others.

Beyond being an amazing husband, father, farmer and fire fighter, Tim was known as many other things: a morning person, bargain shopper, constant teaser, avid Cyclones and Cardinals fan, believer of dessert first, hunter, fisher, tinkerer, memory-maker and encourager of all. He was involved in several organizations, including the board of the Iowa Charolais Association, member of the National Charolais Association, faithful member of St. Paul’s Lutheran Church, the Iowa Cattlemen’s Association and the 4H and FFA Dad’s groups.

Tim was blessed with a big family and enjoyed getting everyone together. His famous “U busy?” text was often followed up by a long-winded phone call to those closest to him.

Those left to cherish his memory are his wife of 20 years, Chris; his two children: Cody and Baylee; grandson, Colt; his parents: Doug and Claudia Butler of State Center; sister, Micki Butler of State Center; “sister” Sarah Butler; “brother” Matt (Jenny) Butler; his grandma, Jan Paper and sisters-in-law: Stacey (John) Handsaker and Tory (Randy) Lass. He is also survived by several other relatives, his brotherhood at the Fire Station and many friends and community members, whose lives he touched. 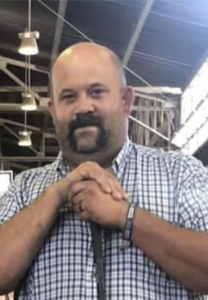