The kind and selfless soul of Henrietta E. Bogan, 85, of Madrid, formerly of State Center, returned to the arms of her heavenly Father on Wednesday, August 11, 2021.

Funeral services for Henrietta will take place at 11:00 A.M. on Tuesday, August 17 at Trinity United Methodist Church, 102 Lynwood in Huxley. Friends and family are also invited to attend a visitation from 5:00 to 7:00 P.M. on Monday, August 16 at the church. Henrietta will be laid to rest in a private family burial at Hickory Grove Cemetery in Newberg following the service. Memorial contributions may be directed to Rosalie Knight at P.O. Box 344, Huxley, IA 50124. A portion of the memorial funds will be donated to the generous work of JeriAnn McLaughlin who has helped so many families in the Huxley area and the rest of the funds to The Madrid Home. The Mitchell Family Funeral Home, 1209 Iowa Avenue West in Marshalltown, has been entrusted with the care of Henrietta and her family. Online condolences may be left at www.mitchellfh.com. Phone 641-844-1234.

Born Henrietta Elizabeth Hauersperger on February 17, 1936 in Gilman, Iowa, she was the daughter of Henry and Elizabeth (McClean) Hauersperger. Henrietta and her family farmed outside Gilman and Newberg. She graduated from Newburg High School in 1954. Henrietta attended Marshalltown Community College and married Richard Arment. They had 3 children. They divorced. Henrietta eventually remarried on January 11, 1986 to the love of her life, Bill Bogan, at the United Methodist Church in State Center. Together they made their home in State Center.

Always one to take pride in her work, Henrietta dedicated 33 years working as the city clerk in State Center. While living and working in State Center she volunteered at the State Center Little League concession stands and served the United Methodist Church. After retiring from the City of State Center in 2008 Henrietta moved to Huxley. She enjoyed volunteering at Ballard Community School concession stands for middle school events. Henrietta was also an active member of Trinity United Methodist Church, taking part in everything from the women’s club and choir to helping in the kitchen with many church dinners. In her free time, she enjoyed crocheting, bird-watching, baking and gardening.

Henrietta had a strong sense of independence and practicality that she instilled in her family. She also taught them to use common sense, to own their decisions and to face any consequences head-on. Her guidance, unconditional love and support are just a few of the traits that will allow her spirit to live on through her family. Her grandchildren loved spending time at grandma’s, enjoying her delicious baked goodies and homemade beef and noodles, as well as rolling down her hill.

In death, Henrietta is reunited with her loving husband, Bill Bogan; her parents; and her beloved brother, Bill Hauersperger. 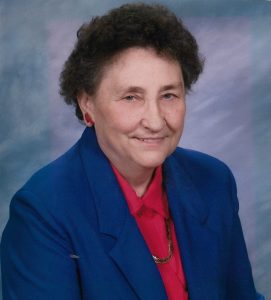