Mary Ellen was born in Newton, Iowa, the youngest of seven children to Henry and Mary (Carson) Townsend.

Henry moved his family to a farm in Marshall County and Mary Ellen attended a country school across the road from their home through eighth grade. She graduated from Rhodes High School in 1948.

Two weeks following graduation, she married Jack Gray on June 6, 1948. Jack and Mary Ellen were married for nearly 72 years and together they raised six children.

Mary Ellen dedicated her life to her family by being a stay-at-home mother. As the children grew older, she worked for Ron Fisher Custom Woodcarving for several years.

She and Jack enjoyed spending many hours on bleachers while watching their children and grandchildren’s sporting events.

She was a member of the Rhodes United Methodist Church and served in many volunteer roles. Mary Ellen also took great pride in serving as an Election Official.

Over the years, Mary Ellen and Jack enjoyed spending time with their friends including the “Blooming Idiots” creating many memories.

She enjoyed crocheting afghans, painting, church activities, playing cards with her card club friends and most importantly spending time with her family.

The family would like to thank Iowa River Hospice for their care. 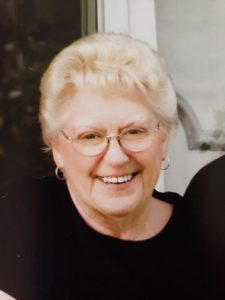