Wilma Jean Townsend Eckhart, of State Center Iowa, peacefully passed away surrounded by family on June 25, 2021. She was born on September 12, 1923 in rural Jasper County Iowa to Henry and Mary (Carson) Townsend. She attended school in the area.

On March 1, 1937 Henry moved his family to a farm in Marshall County. Wilma attended State Center High School graduating in 1941. She then attended Mercy School of Nursing in Marshalltown, Iowa graduating in September 1944. Wilma joined the U.S. Army Nursing Corps and served until December 1946.

She was a member of St. Paul Lutheran Church, the Harland G. Pfantz American Legion and Auxiliary of State Center, and the State Center Historical Society. In 2018, Wilma was selected by the State Center Development Association to be honored by the Governor for her volunteer activities and was presented with the Iowa Volunteer of the Year Award. 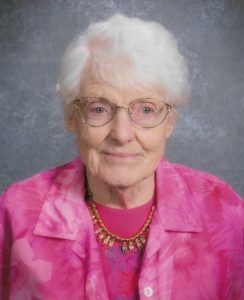