Frank Richard “Dick” Needs, 79, of Laurel, Iowa, passed away suddenly on the evening of June 7, 2021 at UnityPoint Health in Marshalltown surrounded by his family.

Services for Frank will be held on Friday, June 11, 2021 at 10:30 A.M. at the Ferguson Bible Church. A visitation for family and friends will be held on Thursday, June 10, 2021 from 6:00 to 8:00 P.M. at the Mitchell Family Funeral Home. For additional information or to send a condolence please visit www.mitchellfh.com or call 641-844-1234. Mitchell Family Funeral Home is caring for Frank and his family.

Frank was born January 29, 1942 to Frank V. and Betty (Stoneking) Needs in Cherokee, Iowa. He was one of eight children born to the family. Frank attended school at State Center, IA.

He later answered the call of his country and enlisted in the United States Army during the Vietnam War. Following his honorable discharge from the Army, he was united in marriage to Pearl Ahina. The two were blessed with two children whom they raised together. Frank worked for numerous years as a machinist and an inspector for Fisher Controls until his retirement. Frank and Pearl celebrated numerous happy years until the time of her passing. He later on married Betty Fuller (Mills) on September 17, 2011.

Frank was a member of the Marshalltown V.F.W., U.A.W. Local 893, the Marshalltown Street Rods, and the Ferguson Bible Church. In his free time, Frank enjoyed building classic cars, golf outings at the Lincoln Valley Golf Course in State Center and at Wandering Creek in Marshalltown. He loved to travel with the street rods and had a passion about classic cars and eventually rebuilt his own car. He enjoyed fishing, going on camping trips over his younger years, attending sporting events of his children and grandchildren, eating pizza from Bailey’s in State Center, spending the winters in Arizona with Betty, and his beloved fur babies Tramp and Sammy.

He was preceded in death by his wife Pearl who passed away in 2005; his step daughter June Palmer and her husband; three siblings: Michael Francis Needs in infancy, George Needs and James Needs; and his parents Frank V. and Betty V. Needs. 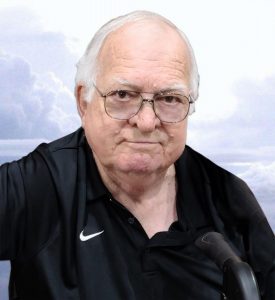