James “Jim” Montgomery, 85, of State Center, passed away peacefully surrounded by his family on the evening of May 8, 2021 at the Israel Family Hospice House in Ames, Iowa.

Services for Jim will be held on Wednesday, May 12, 2021 beginning at 10:00 A.M. at the Trinity Lutheran Church in State Center. A visitation for family and friends will be held one hour prior to the service. In lieu of flowers, memorials in Jim’s name may be directed to Israel Family Hospice Home or Trinity Lutheran Church in State Center. For additional information or to send a condolence to the family please visit www.mitchellfh.com or call 641-844-1234. Mitchell Family Funeral Home is caring for Jim and his family.

James Franklin Montgomery was born May 5, 1936 to parents Wilbur “Bud” and Dorothy (Marshall) Montgomery in rural Hardin county, Iowa. He attended various schools in his younger years and graduated from Macon High School in Macon, Missouri in the Class of 1954. Following high school, Jim moved to the Iowa Falls area where he worked on a farm.

On October 4, 1959, Jim was united in marriage to Kathleen Bangtson at the St. John Lutheran Church in State Center. Together the two began their family raising their four children, David, Douglas, Paula, and Michael. Jim worked for over 30 years for Spread-All Manufacturing while also working another full-time job on the family farm.

Jim was a member of St. John Lutheran Church and Trinity Lutheran Church in State Center. In his free time his main hobbies were family, friends, farming, and trout fishing. He was an avid gardener and planted enough muskmelon to take extras to people in State Center. He enjoyed family camping/fishing trips, playing cribbage, facetiming with the grandkids, telling various “dad jokes,” and birdwatching. He was a hard worker and never met a stranger.

He was preceded in death by his parents Bud and Dorothy Montgomery and his brother Jeff Montgomery. 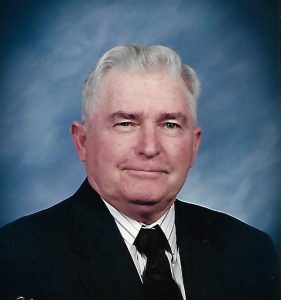