Patricia “Pat” “Patsy” Ferneau, 83, of Gilman, formerly of State Center, returned to the arms of her heavenly Father on Thursday, April 8, 2021 after her passing at Mary Greeley Medical Center in Ames.

A funeral mass for Pat will take place on Saturday, April 17 at 10:00 A.M. at St. Joseph Catholic Church in State Center. Her final resting place will be at Riverside Cemetery in Marshalltown. A visitation will be held Friday, April 16 from 5:00 P.M. to 7:00 P.M. at the Mitchell Family Funeral Home in Marshalltown. Memorials may be directed to the family for later designation. For questions or condolences, please visit www.mitchellfh.com or call 641-844-1234.

Born Patricia Welch on March 10, 1938 in Marshalltown, she was the daughter of John LeRoy and Beatrice (Musil) Welch. She grew up in Marshalltown and graduated with the class of 1956 from St. Mary’s Catholic High School. On June 30, 1956, Pat was united in marriage to her high school sweetheart, John Ferneau, at St. Mary’s Catholic Church. Together, they resided in several towns in central Iowa, including many years in State Center. Pat kept herself busy raising three children and working outside of the home, including as a cook for the West Marshall School District, caring for patients with cerebral palsy at Village Northwest in Sheldon, Iowa and over a decade of semi driving with John.

A strong prayer warrior, Pat’s faith was unshakeable. She was an active member of St. Joseph’s Catholic Church in State Center.  In her free time, she enjoyed crossword puzzles, croquet, and playing cards and other games with her family. She was a gifted piano player and loved writing, including her own poetry. Pat is remembered by many for her kindness and virtue. She believed “what’s right is right and what’s wrong is wrong” and modeled that kind of honesty every day to her family.

In death, Pat is reunited with her parents; her granddaughter, Alyssa Ferneau; her brother, Bill Welch and her sister, Yvonne McDougall. 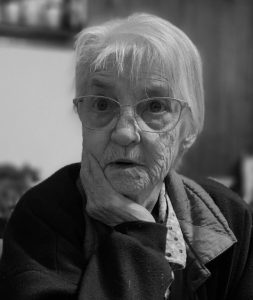