Bud grew up in rural Melbourne where he learned about farming from his dad.  He attended the Melbourne school and graduated in 1947.  After graduation, Bud worked for local farmers until he was drafted into the Army in January 1951.  He honorably served in Korea and Japan from 1951 to 1953 during the Korean War.  Most of his service time was spent working in the hospitals in Japan.  When he returned home he continued dating Anita Heil.  On October 12, 1953 Bud and Anita were united in marriage at St. Mary’s Catholic Church in Marshalltown, Iowa.  From this marriage they were blessed with five children.

Bud continued working for farmers in the Melbourne area.  Later, they moved to St. Anthony, Iowa where Bud farmed and then worked for Mackin Grain.  In 1963  he and his family moved to Clemons, Iowa where  he worked for Standard Oil.  Bud also delivered the Des Moines Sunday paper for 15 years.  His last job was working for Marshall County where he did secondary road maintenance for 28 years.  During this time, in 1991,  his wife Anita passed away.

In January 1992 Bud got reacquainted  with Caroline Freese Rohach when he asked her to go to a New Year’s Eve dance.  Their relationship blossomed, and Bud and Caroline were joined in marriage at St. Boniface Catholic Church in Garwin, Iowa on July 11, 1992.  From this marriage five step-children were added to Bud’s family!

Bud’s love of farming continued throughout his whole life and he was able to help out on the Donald Fisher/Larry Fisher Farm for 40 years.  Bud enjoyed spending winters in Arizona, but he always returned in time to get into the field! Sports of all varieties were a passion of Bud’s and he was an avid Hawkeye fan! Over the years he also enjoyed fishing, hunting, farming, dancing, and playing golf.  He was a member of the Moose Club and the Sacred Heart Altar and Rosary Society.  He also served as a volunteer fireman for the Clemons Fire Dept. And he served a term as mayor of Clemons and was on the Clemons City Council.

A visitation for Bud will be held at Mitchell Family Funeral Home in Marshalltown, Iowa on Tuesday, April 6 from 5 to 7 PM.  The funeral mass will take place at St. Francis of Assisi Parish: St. Mary’s Catholic Church in Marshalltown, Iowa on Wednesday, April 7 at 10:30 AM.  Burial will follow at Sacred Heart Cemetery in St. Anthony, Iowa with full military honors presented by the Combined VFW/American Legion Honor Guard of Marshalltown, Iowa.  Mitchell Family Funeral Home has been entrusted with the care of Bud and his family.  For additional questions or to leave a condolence, please visit www.mitchellfh.com or call 641-844-1234. 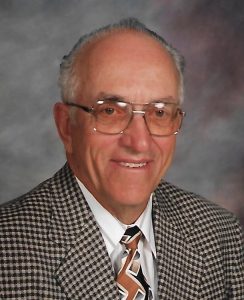