Jay Edwin Coble, 87, was released from his earthly bonds and entered into glory on Monday, February 1, 2021.

Born May 13, 1933, to John Ira and Anna Mae Meckley Coble on the Coble family homestead in rural Hershey, Pennsylvania, Jay was a 1950 graduate of Hershey High School. After a couple of years working on the family farm, Jay answered the call to ministry, which first meant he had to earn a bachelor’s degree. So off to Penn State he went where he lived over the Dairy barn, earning his room and board working on campus. While a student at Penn State, Jay competed on the nationally recognized Penn State Livestock Judging team.

While in college, Jay served as the statewide EUB (Evangelical United Brethren) youth delegate to the Pennsylvania Ecumenical Youth Council. It was during one of the gatherings that he met the Presbyterian delegate, Elinor-Ann Lazarus. For him, it was love at first sight. They were married on August 24, 1958.

Jay enrolled at United Theological Seminary, Dayton, Ohio, in 1959 to pursue his Master of Divinity degree to become an agricultural missionary. Due to changes in the missionary programs of the denomination, he resigned after 18 months. He went to work for the Pennsylvania Extension Service for 2 years in Butler, Pa., Before returning to manage the family farm in Hershey. Those years were filled with much joy as Jay and Ellie welcomed 6 children into the family.

On what has often been described as a journey reminiscent of pioneers, Jay and his family spent the next 10 years moving westward. Two semi-trucks followed them wherever they roamed, one with household goods and the other with Jay’s herd of purebred Poland China hogs and farm implements.

From 1973 to 1976, Jay served as the Poland China Record Association’s executive secretary in Galesburg, Illinois. During his time with the organization, he edited the 100th Anniversary book of this breed of hogs. He traveled the country visiting farms large and small, state fairs, and national livestock, promoting the Poland China breed.

From 1976-1980 Jay farmed in rural Hardin County, Tennessee. In 1981, when the family moved to Iowa, that deep roots began to form, and the Midwest’s plains became home.

In March 1987, Elinor-Ann lost her battle with cancer. Jay focused his energy on farming and working with organizations such as the Iowa Pork Producers and Iowa Farm Bureau. Jay had the opportunity to travel to Hungary with the Iowa Farm Bureau, and this love of travel, learning, meeting new people, and adventure continued after he met and married Bonnie Goodman from rural Marshall county on September 27, 1996.

They then became national leaders with NOMADs (Nomads On a Mission Active in Divine Service), a volunteer organization that provides construction and volunteer labor for United Methodist organizations. Through NOMADs, they spent their winters in their travel trailer in service across southern Texas and into Mexico, and in Florida.

Jay enjoyed history, and he jumped at the opportunity to be part of the Bicentennial commemoration of the Lewis and Clark journey. Jay and Bonnie did advance work for the team, following the Lewis and Clark trail to the Pacific Ocean. When it was time for the 200th-anniversary re-enactment, he traveled from St. Charles, Mo to Yankton, SD on the keelboats portraying Private Peter Weiser, a member of Corps of Discovery and a fellow native Pennsylvanian.

Jay responded again to God’s call to serve the church, pastoring two churches in the Iowa Annual Conference of The United Methodist Church as a Licensed Local Pastor. Bethany in Marshalltown and Minerva, rural Marshall County, were blessed by Jay’s thoughtful sermons. His desire to serve God and neighbor was evident in their community outreach.

In his later years, when many would enjoy retirement, Jay was able to fulfill a lifelong dream of raising a small herd of purebred Angus cattle. Jay and Bonnie built up a reputation of providing breeding stock to area farmers with excellent growth and marketability. Jay was what some would call an ‘early adapter,’ always on the cutting edge of farming practices. He was one of the early pioneers of genetic testing for his hog operations and later his Angus herd.

As Jay approached his mid 80’s he knew that they couldn’t keep up with the herd of cattle much longer, so they switched to raising alfalfa hay, which allowed Jay to get out and about to help on the farm.

Jay loved sports – there wasn’t a game he didn’t enjoy. However, baseball was always a favorite. He even pitched a perfect game for one of the fastpitch softball teams he played on as they moved across the country. He coached his son’s baseball teams, and he was always up for a game of catch with his grandchildren and great-grands.

When asked who he was rooting for, Iowa or Iowa State, he would say ‘yes,’ unless they played Penn State. He was first and foremost a Nittany Lion and was a lifelong member of the Penn State Alumni Organization.

His one regret in life was never getting a hole in one. He had an ugly golf swing, but he sure enjoyed the game of golf. He loved playing golf with Bonnie, his younger brother, David, his son Mark, and his friends at Lincoln Valley Golf Course, State Center.

Jay loved dancing. He enjoyed music of most kinds, playing cards, farming of all kinds, and really liked to visit with people. He loved, and was so proud of, his children, stepsons and his grandchildren.

Jay is also remembered by five step-grandchildren, Jacob Black, Brittany Hoffmann, Cassandra Day, Emilie Day, and Jessica (Paul) Montalto, twelve step-great grandchildren, and nieces and nephews who live from coast to coast and the many, many friends he has made along the way.

While the past couple of years have been tough for Jay and Bonnie as he has struggled with dementia, he has been surrounded by much love, and his family gives thanks to God for a life well-lived. We trust that he now has the answers to many of his questions, especially about the book of Isaiah, and we look forward to the day when we can be reunited.

Oh, the Lord’s been good to me

and so, I thank the Lord

for giving me the things I need

the sun and the rain and the apple seed.

The Lord’s been good to me. Amen!

A private family service will be held on Saturday, February 6th with a memorial service planned for later in the summer.
In lieu of flowers the family has asked that you make a donation to one of the following:
his church, New Horizons United Methodist Church, Melbourne Iowa,
his favorite mission project: McCurdy Missions, Espanola, New Mexico, https://mccurdy.org/ the Lewis and Clark Discovery Expedition Foundation, St Charles, Mo http://lewisandclark.net/or Iowa River Hospice. 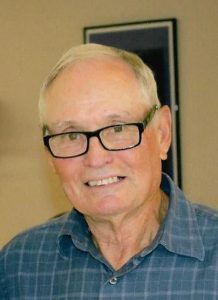